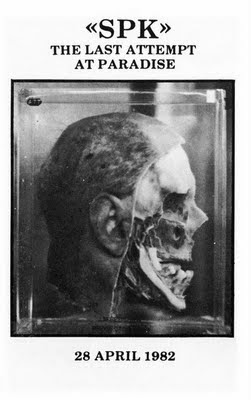 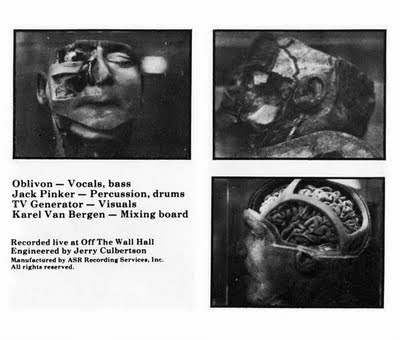 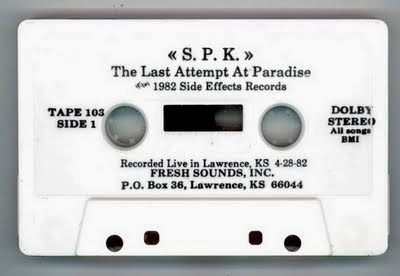 Frightening stuff. Classic 'Leichenshrei' era SPK captured Live in Kansas in 1982.
Plenty of electronic throbbing, tribal chanting, searing noise, and industrial percussion(i.e. hitting bits of metal). There were few less compromising acts on the the planet in the early 80's than these jolly chaps. Leading exponents in the Industrial school of doing things, along with Throbbing Gristle, Boyd Rice, Einsturzende Neubauten, and Whitehouse, this was a genuinely new music. Yes, some elements had appeared before 1977, namely Faust had used machines,and battered scrap metal in the early 70's for example, but this was original and challenging, and it was saying something about our misguided way of life and the horrors of the Human Condition.
They took it to the brink,then went Disco???.......admirable in a way, and something I always encourage in these pages; namely,do NOT follow expectations.

Recorded live in Lawrence, KS - April 28 1982.
Some Copies came with 'Primer'- Booklet.
Does not contain a tracklist, but here is the setlist:

A1. Maladia Europa (The European Sickness)
A2. Suture Obsession
A3. Berufsverbot
A4. Metal Field
A5. A Heart That Breaks (In No Time or Place)
A6. Cry from the Sanatorium
B1. Ground Zero : Infinity Dose
B2. Wars of Islam
B3. Walking on Dead Steps
B4. Despair
B5. Serenace