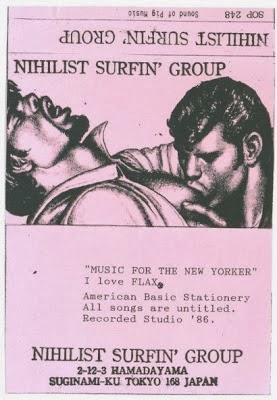 Like Charlie’,I suppose a Nihilist surfin’ group ‘don’t surf’; and why should they? Its a crap pastime for boys with no life skills who want to score some shallow chicks. Whereas, a sure fire way to score with NO chicks at all is to be in an industrial noise combo. Here you need life skills, like intelligence, charm, and a skill for earning a meagre living, because you ain’t gonna earn any dollar from making ‘music’ like this.
No-one who works in an electricity generating power station wants to come home and listen to it again on dolby-free cassette tape. Just like no-one who works in any industrial environment actually makes industrial music. Its created by pale, work shy ,college graduate dreamers, who were too lazy to be bothered to learn an instrument, but fantasised about being in a ‘band’.
There is nothing wrong with this, in fact its a recommended short cut to achieving something ‘different’ in the world of art; but as in so-called ‘art’ ,you do need a grounding in the history of the subject to avoid repeating past feats. This is where the Nihilist Surfin’ Group let themselves down; because the electronically generated throbbing machinations of the pieces here, merely reflect the earlier Industrial Power electronics previously unleashed by the Come Organisation, again, 7 years earlier in the wonderful sceptred isles of Great Britain and Northern Ireland. But, this has that slightly softer American approach, which I find quite charming, and I have to say, preferable. It doesn’t try to be , or glorify , so-called ‘evil’; which can only have a subjective definition, and perpetuates this mythical force as a means of control. If you believe in evil, you believe in ‘God’, which immediately removes a person from the category labelled as ‘Intelligent’. If you want Evil, read about the Christian God’s behaviour in that favourite of medieval English literature, ‘The Bible’.
For me, this stuff is less about the music, or non music, than it is about the object of a tape containing an aural recreation of the modern world, packaged in an attractive rectangular package, with a crudely printed information card inside(including ,in this case,a classic androerotic drawing by Tom of Finland!). Basically its an art object, not really meant to be actually listened to all the way through; even though I will admit to doing so, and thoroughly enjoying it!

BOTS CD sent Monday last week, got it yet?