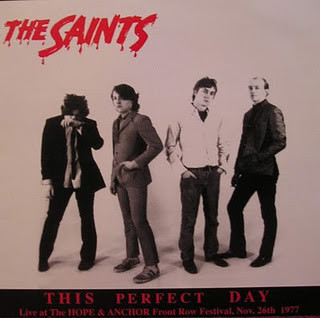 The  best track on The Hope and Anchor Front Row Festival album is ,arguably, 'Demolition Girl'? So if you wondered what the whole set sounded like.......here it is. Complete with moronic audience ambiance including, a typical intervention from some grubby malcontent who asks the audience "what (they) fink of Jim Callaghan, what (they) fink o'the bloody National Frunt and Margaret Fatcher and 'er boys?". Pretty reminiscent of the open mike session in the opening track of Alternative TV's first album, and very typical of the uninspired politics of the punk masses; plenty of questions but offering no solutions.
This is where The Saints get plenty of 'Punk' brownie points with ladles full of genuine nihilism; backed up with some of the most dense and forceful balls to the wall Rock'n'Roll ever committed to vinyl.
This went unnoticed by the identikit 'punks' of course. Where was the spikey hair, leather bikers jacket, kings road t-shirts, spikes and chains? How dare these antipodean interlopers be individuals!?
They were around before Punk Rock, so they can sit comfortably in the same category as The Ramones, and Richard Hell.......yep thats right 'Proto-Punk'......how would we understand all this mess without pigeon holes one suggests......maybe we shouldn't try and understand it at all? This group were fantastic, its as simple as that sometimes.

A1 Do The Robot
A2 Lost And Found
A3 Lipstick On Your Collar
A4 River Deep Mountain High
A5 Memories Passed
A6 Run Down
A7 This Perfect Day
B1 Messin' With The Kid
B2 Orstralia
B3 Nights In Venice
B4 I'm (Stranded)
B5 Demolition Girl
B6 One Way Street
DOWNLOAD and make your day perfect HERE!
Posted by Jonny Zchivago at 18:50 4 comments: 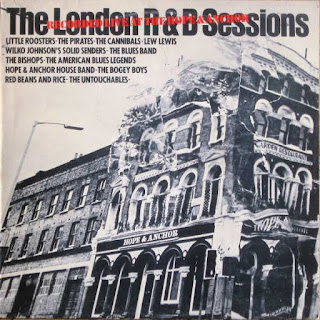 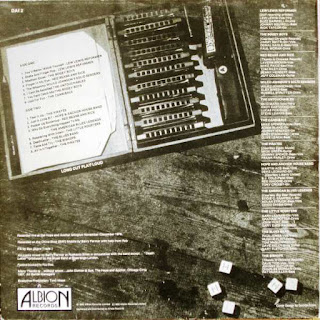 Let's have some R&B action? Preferably the brand of R&B that doesn't involve Beyoncé jiggling her fat arse in yer face. Well i suppose I'd prefer her arse in my face to Wilko Johnson's, but*(*in both senses of the word), gimmie The Solid Senders sublimly intense version of 'The Whammy', to a whole galaxy full of 'Urban' R&B NWO propaganda any day in a thousand light years of interstellar space.
You'll find no Stars in this crumbling corner of the Rock'n'Roll Galaxy, just a few rapidly collapsing dwarf stars of various hues, their orbiting planetoids and captured space junk.
By 1980 Pub Rock had overcome the initial acceleration from the explosion of the early to mid-seventies singularity,and had succumbed to the gravitational collapse inflicted by the punk rock era, firmly back to where they came from......'the Pub'.
If needs be told, this stuff never really suited medium to large sized concert halls.It's the sound of a small, crowded, grimy smoke filled room, framed with the stinking perfume of stale ale.

This is the 'punk-free' sister disc to "The Front Row Festival" double album, showcasing a more pure later-Pub Rock sound, recorded at the Hope and Anchor between November and December 1979.
Amid the faithful recreations of 60's Rhythm and Blues, and impressions of yer actual electric blues; we have the more spikey, amphetamine fueled, blues of Lew Lewis and Wilko Johnson. Which are full of adrenaline and intensity. The Pirates, are as always themselves; a genuine slice of early sixties meek-era UK rock'n'roll, backed up by The Bishops aggressive take on the same thing.
There's some soul-y stuff as well, which I can't abide!....reminds me of the Soul wankers on my estate (that's 'council' Estate, not the land that surrounds my posh Manor house), who were into the depressing 'Northern Soul' scene. they always took great delight in kicking the local freaks heads in, like me; and they smashed my Devo record....cunts! 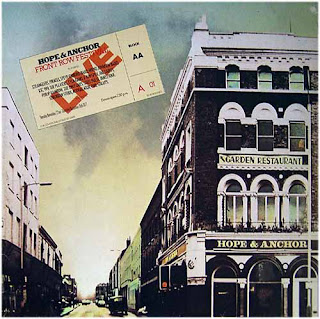 A natural place to start our exploration of UK Pub Rock would be in a Pub I suppose. One of the principle Pub Rock venues was the Hope and Anchor in Islington,where the Front Row Festival was held between November 22nd and December 15th 1977. A very accurate document of live music in the year 'Punk Rock Exploded'......as we see, as in the charts and record shops, Punk Rock was largely notable for its absence. Most of the acts on this compilation would have sat confusingly in the Punk and New Wave section of my local record store. A mixture of what we now call Proto-Punk, Power Pop, Pub Punk, and Pub Rock were all slotted into the New Wave shoebox by confused demin clad staff who listened to Little Feat and had beards; today we'd call them 'Hipsters'.
There's some bandwagon punk on here of course like the lamentable Suburban Studs, and the admittedly excellent 999;Aussie Pub Rock by the fantastic Saints,the proto-post punk pop of XTC, and trendy Kings Road 'Punkers' X-Ray Spex.
Quite a mixed bag, but anything with Wilko Johnson on it has to be worth the entry fee; counterbalanced by an appearance by maybe the biggest Pub Rock band ever(except maybe AC/DC?), the inexcusably toe curlingly bad, Dire Straits!!?
The stand out tracks are ,obviously, The Saints and ,somewhat less obviously, The Steve Gibbons Band's 'Speed Kills'.
Like the swinging '60s' ; in 1977 Punk Rock was largely confined to a few streets in London,the tabloids, and the Music Press. This is a more accurate document of the music scene in '77, where Flares still ruled, beards ,long hair, beer rather than speed as the drug of choice, and not a single garment from Seditionaries or Boy to be seen.Pub legends ,The Sex Pistols, were unavailable; but this lot were,in a small venue near you. And everyone was signed to a major label;well,at least until the end of 1978 that is. 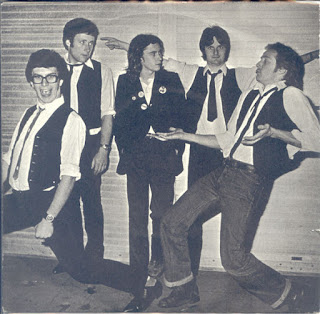 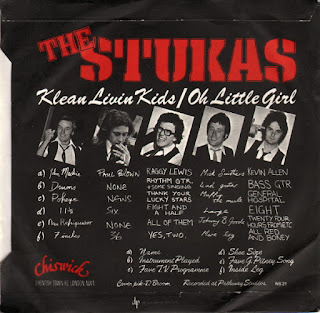 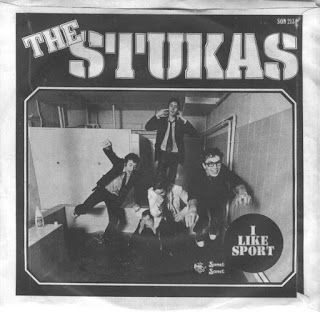 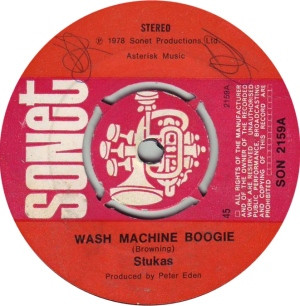 What does one do when the musical world is full of music that doesn't speak for you, as in the the modern world now....the answer is in the title of this here Blog......'Do It Yourself'!
DIY didn't start in the immediate Punk/Punk punk era. Often, prog folk outsiders did it in the seventies, smellie hippies did it in the sixties,incredibly strange freaks did it in the fifties, and Hillbilly rednecks did it in the twenties and thirties.
This didn't always entail making and producing your own recordings. It often manifested itself in playing the music you wanted to hear live yourself, because no fucker else was gonna do it.
No scene manifested this as much as the 'Pub Rock' era in the UK.
Between 1971 and 1976, the only way one could escape the more unattractive end of Progressive Rock was to play 'proper Rock'n'Roll yourself; a kind of Regressive Rock, or Regg Rock.Based on Johnny Kidd and the Pirates rather than Mozart and Brahms. Exploring the eternal pleasures of the Chuck Berry Riff rather than double keyboard arpeggios.
Myself, being a pre-teen into Gary Glitter and T-Rex, this lack of rock'roll never bothered me, because, as far as I can see, Glitter and Bolan played a more progressive form of original Rock'n'Roll ; the Pub Rockers were very stuck in 1961, which I didn't understand until after the Pistols combined the two for the kids. Bowie plays Johnny Kidd I did understand, especially when combined with anger and energy.
Dr. Feelgood and Eddie and the Hot Rods became more comprehensible to the 13 year old, and I adore those two groups. The other lot took a longer time to appreciate.
One of these crossover groups who looked Punk but sounded weedily retro in a Pub Rock stylee, were the contrarily named 'Stukas'. Expecting some hard driving punk, and seeing their advert in Sounds, I bought their single 'I Like Sport' and hated it! It sounded nothing like a screaming Nazi dive bomber, but more like a spluttering microlight dropping liberal party leaflets over Surbiton* (*leafy suburb of London famed as the setting for anemic BBC sit-com 'The Good Life').
Over the years, one has come to appreciate most of the rocky side of the Pub Scene.....although That Brinsley Schwartz, country and Western stuff still leaves me nauseous.
I suppose it was all definitely Punk before Punk,and I especially admire their reluctance to go to the metal end of rock, unlike the Punks. Then the punks who didn't go 'Metal' went Post-Punk of course; which was nothing more than Nu-Prog.
As the Pub Rockers knew nothing about Prog, again unlike the Punks, who were mostly all Proggers; they stuck to playing the music they loved, which is unpretentious, unfiltered, post Elvis pre-beatles rock'n'roll …..and why not?

Die or DIY? Presents for you , the complete vinyl discography of the feebly un-macho pub-punk pop of the Stuka's …...I like 'I like Sport' now.

(PS, anyone got the Peel Session?) 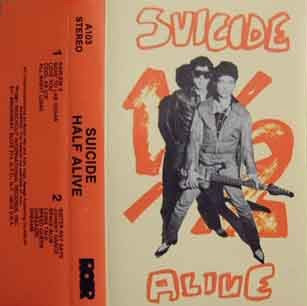 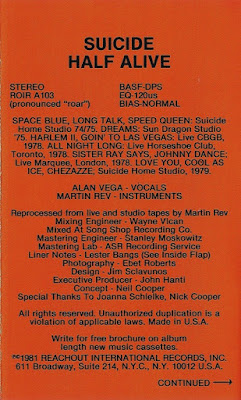 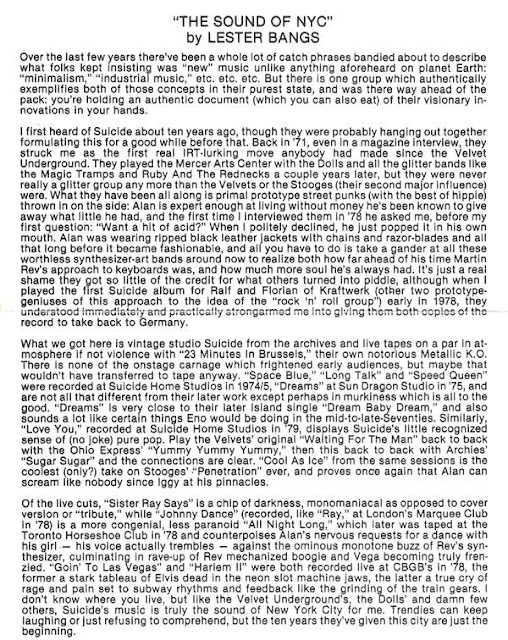 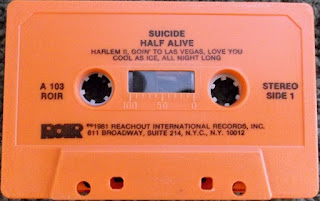 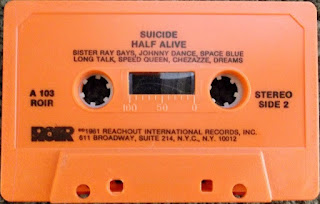 Tragically, there's now only half of Suicide left alive!? So, appropriately, here's the classic live/studio retrospective ROIR cassette, "Half Alive" from 1981 to remind us of of the empirical genius of the world's second synth duo (after the Silver Apples of course!).
The first 'pop' singer I ever saw in the flesh was Alan Vega, briefly anyway, before Suicide were forced off the stage by a barrage of various missiles hurled by  the so-called punk fans who'd come to 'rock-out' to the Clash. Suicide were at least a decade and a half ahead of of everyone else. This brief exposure to a darker kind of music,forbidden even by my peers, was the start of my rocky road into the deeper tunnels of the pop world. A group/duo that was so roundly hated was fascinating for me. There are few acts that have drawn complaints from both my parents and my own generation than Vega and Rev;up there alongside Whitehouse for sheer confrontation and visceral out-thereness.
The Lester bangs notes to this cassette sum it all up very nicely, so i'll respectfully shut the fuck up.

BONUS TRACKS FROM THE CD VERSION: