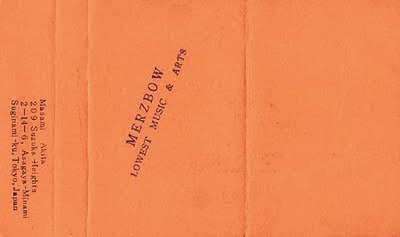 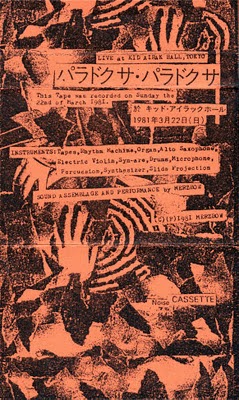 I know I Know,posting a scraping noise-fest from a Japanese artist is no way to mark Armistice day; and I haven't forgotten what happened on the Burma Railway by the way!
The Japanese were victims too, of a brutal regime,and of Harry S. Trueman, who didn't think twice about slaughtering 100's of thousand of women and children with his vengeance weapons.
This live recording from 1981, is a fitting tribute to the victims of Hiroshima and Nagasaki, whose deaths are too easily skated over on a day when we should be remembering ALL of the war dead,not just the 'glorious' ones.
This Live cassette release, contains the sound of malfunctioning media systems during an air raid, accompanied by the scraping squealing strings of a Violin, provided by Kiyoshi Mitsutani.
Live at the Kid Airak Hall in Tokyo (or should that be renamed the Kid Air Raid Hall in Hiroshima?), this is Merzbow at his improvisational best, with echo's of Throbbing Gristle, Albert Ayler, and SPK, mixed up into a cathartic industrial squeal of pain.
So here is a fitting minute,going on hour, of Noise to play at 11am on November 11th.