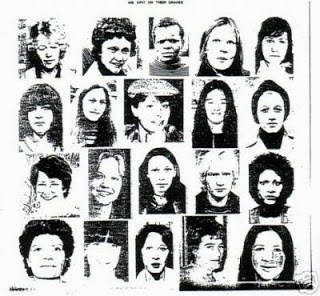 So Whitehouse is unlistenable morally bankrupt shit music is it? If that's your belief then this should make you even more livid.
Containing one Kevin Tomkins , sometime collaborator with Whitehouse, the charmingly monikered Sutcliffe Jügend, made this sonic misinterpretation of Danté's Inferno in 1982.This disc consists of recordings from the 10 hour cassette box set originally released on the Come Organisation label in 1982, and remastered in the Spring of 1997. A nasty, god awful racket, of distorted oscillators, screaming, and skin peeling squealing, that would make even the most open minded muso gag.
Insulting  smug musicians is a noble cause, no matter how tasteless the subject matter is.
Although, why anyone would want to idolise, albeit in a self-challenging listener baiting way such as this, anyone who looked like Oddbod senior(p.Sutcliffe) from Carry on Screaming, I'll never understand.
There were a few classier assassins out there to choose,if there was ever such a thing.
Even in the name of "art" one has to respect the feelings of those who might be involved in the subject matter.
Of course what the creator of these atrocities to music want us to do is Spit on the graves of the Peter Sutcliffe inside all of us.......if that isn't their aim then I spit on their own sad little adolescent graves, and that of the bearded comedy monster P.Sutcliffe.
And just in case someone points it out ,yes Jügend alludes to the 'youth' bit of the Hitler Youth.If you want subtlety, musically this isn't the record for you , but perhaps the message behind the madness is? Cue comments by people who know better..........

DOWNLOAD some graves to spit on HERE!
Posted by Jonny Zchivago at 09:56

I remember the first incarnation of the now long-defunct (I think?) Sickness Abounds having the full ten tape box up at one point, along with the original cassette version of Ramleh's Awake! box. I downloaded the latter, but it's currently stuck on a broken hard-drive; Mundy reissued it quasi-recently as a pimped out eight CD set. But I never went for the full SJ box, which in hindsight is somewhat unfortunate, even if most of it might be crap.

Yeah, it is a pretty uninspired retread of the same whitehouse track over and over again; but these things work on two levels, as boring noise, or an art object.Thats what makes Industrial music collectable. great stuff, even if i never play it.

So this is Oi! huh. Pretty.

I get to see these brown shirts next week in LA. I would be more excited but you know. Been a rough week and all. I think that anonymous asshole above was me but I can't be sure. Sounds stupid enough anyways. Oi. Thanks as always. I wanted the whole thing but I'll just put it on repeat and claim the feat. Good night blacky.

GG Allin would take a big shit on them.

@ punky ,looking at the wimps in all the power electronics bands,they'd run a mile from Jesus Allin as would any sane person.Bit of a twat was he anyhow.