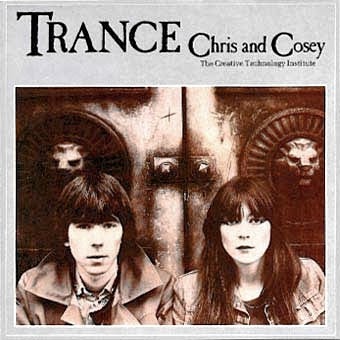 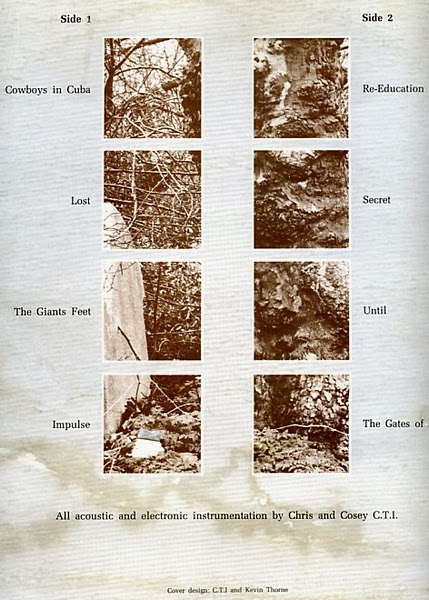 Basically an album of the electronic backing tracks that adorned Throbbing Gristle releases , but without that vital performance aspect,now commonly referred to as the 'X' factor by a certain smug showbiz impresario.
Very attractive are the vintage analogue sounds,but its all rather like a bunch of half finished pop songs, waiting for some vocals.
Ironically, of all the TG offshoots, its this pair that seem to have an enduring place in the musical landscape of 2014; now thought of as Minimal Wave pioneers!? Which of course they were, but "...these people are (not) the wreckers of civilization!"....to paraphrase illuminati puppet MP Sir Nicholas Fairbairn. He would be very pleased to hear this record, and earlier, superior, effort "Heartbeat".

Yes Carter Tutti seem to have found a place in the contemporary landscape but methinks this is partly because you have quite a few avangardistas at eth Wire (etc) who never got on with the Porridge or Sleazy aspects of TG. They kind of wanted to like the sounds but all that death camp stuff was just too much. The Void Carter Tutti LP sounded just like TG but without Porridge which perhaps was not surprising as the backing tracks were indeed intended for the reformed TG before Porridge buggered off.
Eric

How I smiled at that and then un-smiled when I saw the gloriously fast Google Drive download, replaced by the sound of "Unfortunately this file is no longer available, the service has been discontinued" - now, I'm as avant-garde as the next but the line of text doesn't have the same feeling as the actual rip.

You know what's coming don't you, the familiar cry of a thousand comments "can I get a re-up please?" (at least it beats the old favourites in the form of 'check my blog out' and "can you post it in WAV, can you buy and send me the record?"

Obviously, the idiot that I am, the above comment should have been posted at the Men With The Deadly Dreams post.

I opened this page to say that Trance has become one of my favourite TG related albums, though I paid little attention to it at the time - it has a timeless feel, unlike the later stuff which is too influenced by contemporary erm... influences.

Having just bought the expensive Japanese import CD of Trance, I would have to say that though.

Any chance you could re-upload this one?

yep, i'll do it tonight.

Thanks! This blog is the most amazing thing on the internet right now. Thank you for thoroughly expanding my horizons.

I am humbled.
Thanks.

Saw & downloaded.
Thanks for sharing.
My fav electronic pioneers

There's a vitality and an effervescence in this that is just irreproducible nowadays. Whatever it may have been intended to become, it is what it is, an astounding, inimitable tautology of its own definition. Without this all the stuff that's come after since would have been so different. Even just "Re-education through Labour" and "The Gates of Ancient Cities" shine out like anthems, announcing the program. This album lights up the landscape like a jumplead starting a battery.