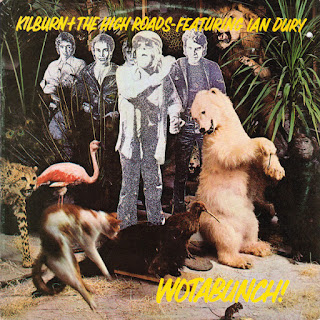 The Kilburn's second album('Wotabunch!') was recorded before their first ('Handsome'),in 1974, and were(almost) exactly the same!.....except that I prefer "Wotabunch!" to "Handsome". Released as a cash-in on Ian Dury's recent success  by the despicable Wanker Brothers label. they added 'Featuring Ian Dury' to the band name to appeal to the average 'New Wave' customer. I'm sure some dick in the WB offices suggested that they call it 'Ian Dury and Kilburn and The High-Roads' at some juncture in the farce that is/was the record industry.
Can't be arsed to write anymore so here's some cut'n'paste from wankypeadia:
'Wotabunch! is much closer to their live sound than the softer, polished Handsome versions. Dury was not pleased with the release due to a remix featuring the addition of strings. The final remix for the recordings was done more or less behind Dury's back, while on he was on a week-long holiday. However, this was soon to be irrelevant, as shortly after the sessions were over Raft (the record label that had signed the band) folded. The bands on the Raft label were told that they would go to WEA, who owned Raft, but after a visit from WEA's top man Joe Smith at a concert, Kilburn & The Highroads were dropped.'.......there you go. 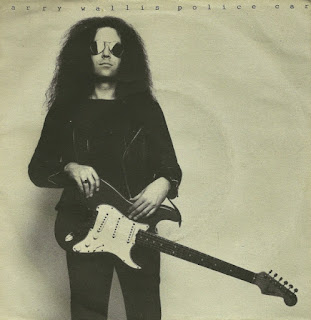 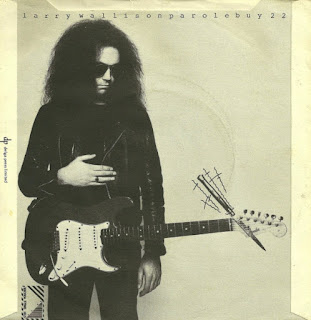 The Arch Duke of UK proto-punk ,Larry Wallis's classic single for Stiff, is a medium paced pub punk dirge; where the former Fairies,Motorhead guitarist casts himself in the role of a .....er.....Police Car!?...and why not?
The b-side's a Pub-rocking version of 'On Parole', and just leaves one wondering what happened to the Larry Wallis solo album on Stiff? 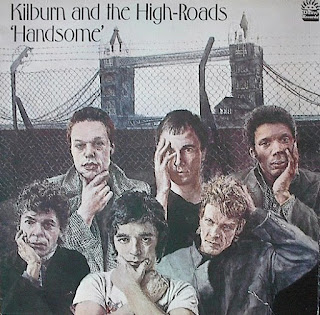 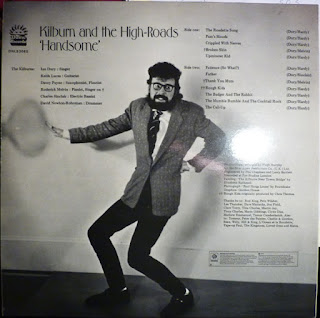 Kilburn and the High-Roads were one of thee Outsider groups. Boasting at least two disabled members among various other misfits,including Keith Lucas,aka Nick cash of 999. A motley crew whose total lack of image became their image.
They played a kind of understated, cabaret-stained version of Pub rock. Ian Dury had yet to find his vocal confidence,or lyrical gymnastics, but a healthy dose of intelligent humour pervades all of this fine album. About as far away from Led Zeppelin as one could get in 1975.....so it must be good?

The Roadette Song
Pam's Mood
Crippled With Nerves
Broken Skin
Upminster Kid
Patience(So What?)
Father
Thank You Mum
Rough Kids
The Badger & The Rabbit
The Mumble Rumble And The Cocktail Rock
The Call-Up

DOWNLOAD from the information super high-road HERE!
Posted by Jonny Zchivago at 15:00 6 comments: 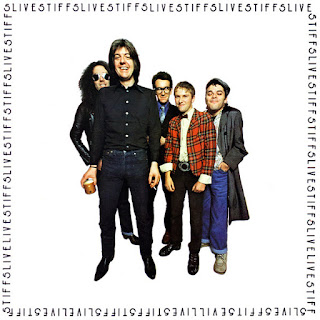 So, consequently, we have the infamous "Live Stiffs" package tour of 1977, and the album of....; containing at least five pub rock legends. Luckily Nick Lowe improved vastly after the demise of the awful Brinsley Schwartz. Ian Dury became the poet laureate of the new wave. Wreckless Eric was a loveable drunk who made a fine debut album. Larry Wallis was in The Deviants, Pink Fairies, and Motorhead,among others, so he can't do wrong. In fact Stiff records did very little wrong in the first three or four years of existence; except sacking the Damned after the second album?...well I thought the second album was rather good. I may have thought different if I knew who Nick Mason was, but luckily i didn't.....I do now, and finally (recently) listened to some post-syd Pink Floyd.....it was all surprisingly enjoyable, except 'The Wall' which was effing terrible!.....very nearly the opposite of Stiff.

DOWNLOAD the tour of the living stiffs HERE!
Posted by Jonny Zchivago at 19:33 2 comments: 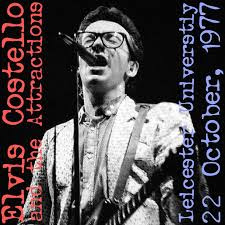 Just got back from a Holiday in Leicester???????....yes, when one lives in a beautiful sunny climate like here in the southern French countryside, you go to a shithole to regain perspective.
I'm from Leicester, and I love it in the same kind of way a hostage loves his/her captor.....'the Stockholm Syndrome' I believe its called.
I'm being harsh on the town of my birth, it is fact quite a good place these days,lots of fancy new buildings, plenty of entertainment, and a football team that will now go down as the achievers of the single greatest footballing triumph over greed and capitalist oppression in the history of sport!

So, naturally, in this Pub Rock trip we're having, here's Elvis Costello and the boys rocking it up on the 'Live Stiffs' tour of 1977 in this very same city.
He's on top form, its a soundboard recording, the first album tunes are better with the Attractions, and Richard Hell was in the audience. Can't get too much better than that?

DOWNLOAD in one spurt HERE!
Posted by Jonny Zchivago at 18:55 23 comments: 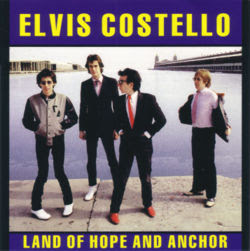 Elvis goes back to his roots in 1980, minus Steve Nieve who got injured in a car accident,so here he's replaced by the guitarist from The Rumour and Ducks Deluxe (Martin Belmont) to up the Pub Rock credentials.
So this is a rare chance to hear The Attractions with a double guitar assault.....it does sound like there's something missing however,but a ferocious performance nonetheless. 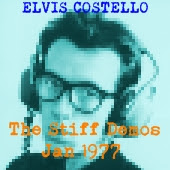 More Elvis......this time Solo Elvis, probably before Stiff renamed him, so, solo Declan.
These recordings emphasize  how important The Attractions were to make him a more, uhumm, Attractive proposition. With them these tunes became rocking classics, without them they are just rather annoying. Its the voice more than anything that gets on ones proverbial 'Tits'. The sneery karaoke americanisms tend to grate somewhat.....but the potential was there to be noted, especially lyrically. From here to 'This Years Model' was a gigantic leap.Full marks to the Stiff Records staff for inventing the new wave Elvis .
Recorded in January 1977.

DOWNLOAD a demonstrative stiff HERE!
Posted by Jonny Zchivago at 10:15 No comments: 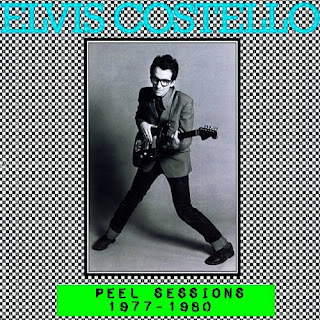 Prime Costello as recorded for the John Peel show between the golden years of 77-80. Even the tracks from the first album sound great here.Of course there are a couple of those horrendous Ballads that Elvis insisted on doing to back up his 'Songwriter' credentials,but they just make "Chelsea" and "Pump It Up" sound even better. Luckily he also chose to do the four best songs from "Get Happy" for the 1980 session.

ps..aren't the video's to "Pump It Up" and "I Can't Stand Up For Falling Down" the greatest dancing white boy videos EVER? 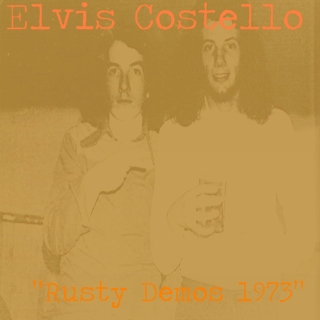 Delving deeper into the dark past of Pub Rock success story Elvis Costello, even before Flip City, and the R Whites TV commercial ,he was in a folksy duo called "Rusty", with chum Alan Mayes.
Liverpool was not in California in 1973, but there's a lorra lorra Laurel Canyon influences on this charming demo tape. Its probably better than most of Declan's post-1980 career, and a good part of his pre-1977 outings too. 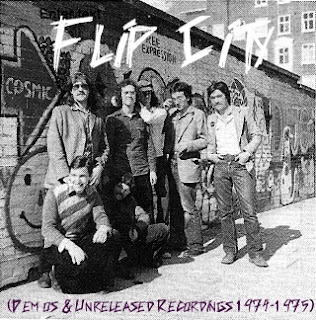 As Pub Rock Legends go, Declan MacManus is up there as one of thee most successful, alongside the extremely dire, Dire Straits, and AC/DC, as Elvis Costello.
Here we have him as Declan MacManus in his Pub Rock group Flip City, as captured in the Hope and Anchor and in the BBC studios.
Its pretty dire (Straits), laid back limp-wristed country tinged american soft rock.Quite similar to the stuff he plays now. Light years away from the majesty of "This Years Model", even though there are very early versions of "Radio Radio" ,"Miracle Man" and "Alison" (Radio Soul, Baseball Heroes, and Imagination). He sings like a fan of blando americana who's spent years singing along to Hank Williams and picked up the whiny intonations....something that blights his voice to this very day.
I received "My Aim is True" as a surprise gift for Xmas 1977, and mildly hated it....."this ain't Punk!" thought my 13 year old brain, it was 'punk' for that generation too old for punk rock and too young for Hippie;but i persevered and still didn't dig it, then heard "(I Don't Want To Go To)Chelsea", which was great.So I bought "This Years Model", which was from another universe, full of intensity and anger, backed up by an electrified band of superbly rocking musicians. This, and most of "Armed Forces", is the totality of Elvis Costello's career. All the rest of his back catalogue is basically Declan MacManus. He was just pretending to get on the tele it seems; but it worked, and now he's a global superstar churning out spades of crud like this, which back in the day would have more likely won favor with 'Whispering 'Bob Harris of the Old Grey Whistle Test (which in 74-75 was full of stuff like this), rather than impressing John Peel BR(Before the Ramones).
To his credit, Elvis, or Declan, had the open ears to pick up on the changing vibe and beefed up the image and the music, to catch the rising surf of the New Wave. I rather think Stiff Records had a lot to do with this also however?
Nevertheless, he made one of the greatest records in R'n'R history, and not many people can say that can they? 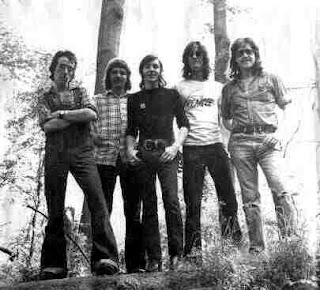 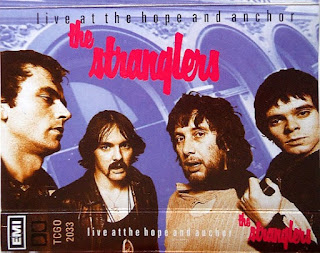 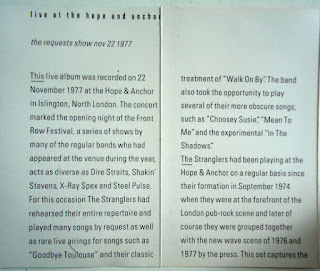 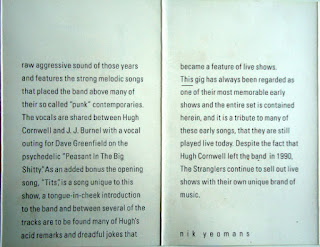 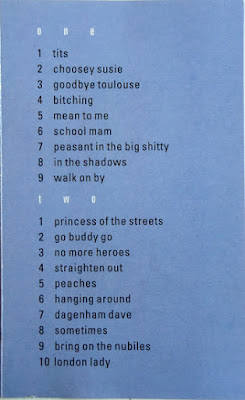 The Stranglers,hmmmmm, not too popular with the pinko's at Rough Trade, but seemed quite accepted by the punters of the Hope and Anchor. Undeterred by songs inquiring about the size of a certain females Tits ('Tits') and making love to a young lady until she bleeds ("Choozy Suzy"), among other embarrassingly sex-issst misogynous melodies.Joe public took a shine to these aging doors-esque pub rockers,and propelled them into the poptastic hit parade, where they no doubt crossed paths with Jimmy Savile,who could have donated some of these lyrics from his secret diaries.
Despite this unsavory misogyny and the amateur dramatic  hard man act, the Stranglers had a very definite talent for penning a satisfying melody or two ,backed up by a barely disguised musical ability.
Above all, J.J. Burnel had a lead bass style and sound that would launch a thousand imitators, not least Peter Hook of Joy Division. This urbane purveyor of a spot of the old ultraviolence, could probably even have a strong shout at being thee most influential bass twanger of all time. He was also the Hardest mofo in the Punk era, famously wiping the floor with Paul Simoneon at the Ramones UK debut gig at the Roundhouse, whom The Stranglers had supported that very same jolly evening (nice one).
In all, a very well rehearsed set, faultlessly delivered, complete with 70's time capsule sexism, and some classic tunes.

DOWNLOAD until you bleed HERE!
Posted by Jonny Zchivago at 23:30 2 comments: