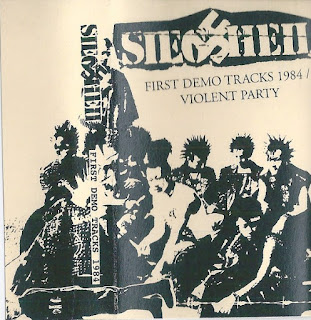 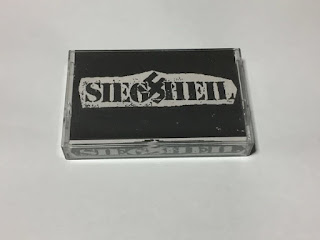 Well, here's a novel idea. How's about I post music as featured in the radio show,like the one wot i just posted here! innit?
There's nothing like getting up the noses of the self-righteous, the indignantly politically correct,the 'Likers',or mr and mrs Standard Views,and their rotten children.
Somehow,It got filtered down to the furthest corners of the globe that British Punks wore swastika's and didn't care who knew it.They wrote humorous songs about the Holocaust,spent half their dole money on studs for their leather jackets,didn't like nuclear war,but basically, existed purely to upset as many people as they possibly could in the shortest possible time.
Sieg Heil from, Kyushu Japan, achieved all of this without one moments hesitation, or even Thought!?
They had a song/thing, called "I Hate Crass" too.Such perfection.
Best not to think about things too much if you're discovering the elemental particles of music,in the rush to shit out the lowest common denominator of music,and/or even Taste....ugh!
'Taste', is a by-word for the kind of awful suffocating type of normal that stifles excitement,and the forward gears of discovery.Even if it means going back to move forward.
Tactical withdrawal was not a phrase that Hitler ever understood....thankfully,or we may have all been wearing Hugo Boss approved outfits for the last 70 odd years....very smart though....nice shiny boots? Or, failing that, for those of us who don't require factor fifty to go out in the sun or have a big nose,stripy pajamas and free accommodation in the east.
The European equivalent of Seig Heil, and also from another former Axis power, was Italy's "Hitler SS",who redefined the word Stoopid with their own special brand of unthinking punk rock.
In the race to reverse back to zero Italians were up there manning the fifth reverse gear of those one forward gear Italian Tanks,and flying the white flag in the face of all those open mouthed Italian Prog groups.
However, the Japanese were never renowned for their surrender habit.They jumped off cliffs with their children to certain death rather than capitulate to the invading normality of the west.I'm surprised they even gave up after being nuked twice.
Sieg Heil only manged two demo's,but i'm sure the constituent parts carried on in a similar vain,hiding out in the dense rain forest on one of those south pacific islands,Still attired in their studded leather jackets and torn jeans, thinking that the Punk Wars were still raging 50 years after we all gave up....sounds a lot like certain parts of rural France actually!?
How 'Wrong' could one go?.....Sieg Heil are no far off 11 on the erroneous scale of wrong rock...so wrong its right.....and so terribly recorded as if a huge fizzing close-miked alka-seltzer was the guitarist,and the drums were recorded via an antique telephone like the ones seen in those Keystone Cops movies.Somehow,impossibly, the quality even manages to go down for the second Demo.This is a unique achievement,which in other more sedate waters would be bestowed the title of "Award Winning" in the sparsely inhabited field of lo-fidelity pop music.Especially for pop music as Unpopular as this.
Who invented Punk? Who Cares, is the correct answer;but listening to this it was most certainly NOT the fucking Ramones!
Tracklist:
"First Demo (Naziam)"

A1 Nazism?
A2 Terrorist
A3 I Hate Crass!
A4 Anti Nuclear War
B1 (Unknown)
B2 Doll Is Dead
B3 Sweet Memories
B4 Sieg-Heil
B5 Who Killed The Jews
"Second Demo"
1-10 Unknown
DOWNLOAD and surrender to the noise HERE!
Posted by Jonny Zchivago at 11:08

I take back everything I ever said!

So glad that you are back bruv. Been so depressed and glum but this is what I needed to make it thru.

Sandi: you're a cabbage. But, of course, you knew this already.

Having you back and even more provocative shines a light into my pathetic little life. Seriously, it's a delight to see you posting again.
Hope all is well in your corner of perdition.

Ah! You're back :) Yeah life here in Indonesia is pretty fucked up too right now, but, still... there are those moments of great fun too...

Like this facebook group I'm on (don't even know how I got there really), it's called "The strange, obscure, diy and outsider music group" and I'm not even staying there anymore because of the music, it's the constants fights is why I'm staying :)

Post even the mildest stuff that the woke crowd doesn't like and the place just explodes (great fun when you say how great the first Skrewdriver album was and how they weren't a fascist band yet at that time), it's been huge fights about Yoko Ono the last week, it's hilarious, now they're getting it on about gays.....

HUGE group too, almost 62.000 members, the poor admin has a hard time with it :) And I wish you were posting there too, can't imagine the fun if that would happen :)

@ Henk.....incredible as it may seem, I am indeed a member of this facebook group.My main source of disbelief at the posts in said group is what these drongo's seem to think is 'Obscure'! Pink Floyd, Velvet Underground...I'm waiting for Dire Straits to be lauded as ignored....which they should be...underground heroes.
I saw these Idiots getting insulting about the great YOKO....although hardly obscure Yoko made music to make the ears and eyes bleed of the ordinary fools that make up the vast majority of the human fucking race.
I will post someof Yoko's fellow countrymen, Sieg Heil, and see what happens.
I assume you'll have my back?...they do tend to gang up on a dissenter every now and again......slagging off Krautrock usually gets them going too.

Check out me and Joe, we'll have your back :) Shaking body in anticipation :)

@Henk...Lol..they no-platformed me! My Sieg Heil post has disappeared!???

But you're still a member of that group??? They haven't dismembered you? You gotta feel for the guy who started that group though, he's from what I understand the only admin and they're cussin' him out constantly, "why did you allow this post??? why did you allow that post??? why haven't you thrown out that person and that person????" And it's almost 62.000 members so the flood of posts there, mainly The Shaggs a thousand times and like you say Pink Floyd, Velvet Underground and every now and then some pretty good stuff, well... the guy must be going crazy :) But he must've acted like lightning on your post :)

@ Henk.... I think i'm still a member,but the sacred word "Nazi" is frowned upon in all instances.It was gone within an hour.

Well...... Maybe there's some gay nazi bands to post there?

Maybe i'm getting it wrong on here...maybe i should post some Pink Floyd too? They were obscure once...maybe in 1965?

second demo is beyond shit-fi, really something else. wonder if these shonen had heard gaseneta

Like I said, I don't even go to that group for the music anymore but to see what they're fighting about now, right now they're on about gay punk/hard-core bands etc. , told "them" that as I'm entering my late 50's I'm now more worried about my gray rights :) Wasn't there a gay skinhead movement way back, where they were wearing pink laces or something? Might be fun posting some of that shit there, if there is any, I'm usually not much for on-line trolling but it's loads of fun in that group :)

Apologies in advance for going low, but aren't _most_ nazi bands kinda gay? I mean, a goodly number of their forbears certainly were--unbeknownst, allegedly, to the rest, lest they'd have wound up with the rest, along with the lunatics, spastics (epileptic variety), and other cool sorts.

Also, welcome back! Cool stunt you did there, but an even better one is to pretend that you're dead and see what kind of shit everyone has to say about you. Surprisingly, very few ever attempt that one--bad p.r. in the long run, I guess.

Yes indeed it was a cunning stunt,and its obscure spoonerism.It did cross my mind to pretend to be dead,then ressurect like the punk rock jesus I always knew i was.
Of course all nazi's are gay,but all gays aren't all nazi's.....how do you figure that one?..... any good Gay Nazi Band names? The Pinkshirts? The Pufftwaffe? Eva Brownloves?......this is fun?
I may fake my death,and take a U-boat to aegentina,just like Adolf did....isn't that right Sandi Hook?

Alas! Good to see you back with that usual scrumptious style of writing, even if it is with the marvels (?) of modern medicine. Curious oddity this one, I had never heard of this band and they certainly look like another gay nazi punk act of the bunch, but it was still an insanely fun listen with how distorted/lo-fi it all sounded ("I Hate Crass" simply wonderful in its short run), so bless you for that as always.

However, in the topic of the japanese punk scene, curiosity popped into the back of my mind and I just had to ask if you were familiar with any Crust Punk/Japanese Hardcore acts from that place. You know, bands like GISM, SOB, Think Again, Disclose, Warhead, etc; and if so, have you ever considered sharing your thoughts about them? it sure is one very interesting and seemingly neverending scene.

Good to see you are doing well, you most certainly deserve to be in a place of stability and "fucktheseonlinecunts" mindset. Cheers all the way from Bolivia mate

Fuck yeah! "huge fizzing close-miked alka-seltzer" has got to be the BEST and most accurate descriptor of a guitar sound I've ever heard in me life! Great to have you back Jonny!