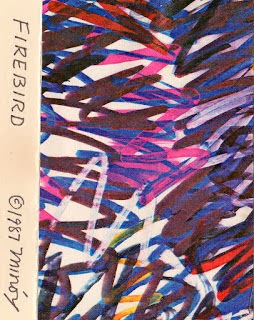 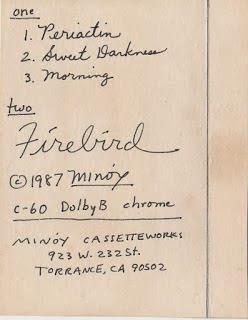 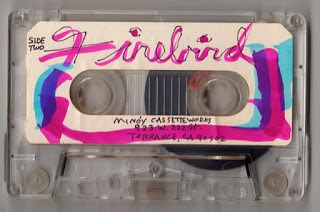 If you like sitting at the end of three miles of steel piping that has its business end in an engineering plant, and maybe even dance to it(?), then side one of this tape is for you.
The title track side, 'Firebird' is much more entertaining,and more industrialesque, than the ambient drone fest on side one.
Firebird has more than a hint of the doomed shipyard about it. Bizarrely,rather than sounding like something that flys in flames, it suggests more of the  sinking and scraping of steel hulls on random icebergs variety.
I suggest that this could be an alternative soundtrack to the Winslett and De Caprio 'Tour de Force(skin)' that was/is, Camerons 'Titanic'; (which would also be a good nickname for Europe incidentally!) Or alternatively David Cameron's "Titanic",formerly known as Great Britain?
Lots of steel scraping, rivet popping, and steam horns sinking beneath the icy water, going on here. And don't we all love a good ship sinking, especially if its recorded from below the unforgiving horror of that cruel mistress,- The Sea!
I can just imagine Minoy playing on the deck of one of those hideous super cruisers in the Med as the ship goes down after striking a hidden reef of petrified sewage. The Titanic got 'Nearer my God to Thee', and this fantasy ship gets 'Firebird', Side B. That should get 'em panicking!

DOWNLOAD this icy firebird HERE!
Posted by Jonny Zchivago at 19:35