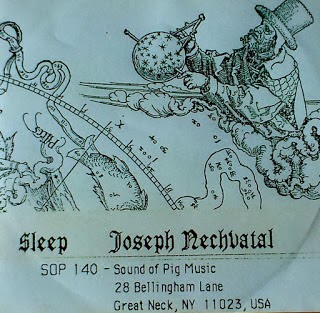 Joseph Nechvatal is nowadays regarded somewhat as an intellectual Übermensch in some parts of New York. As one of the grandaddies of Plunderphonics, he was responsible for some of the groundbreaking wilfull deconstruction of popular culture made more famous by the likes of Negativland and John Oswald. Nothing exposes the downright silliness of  Pop culture than if one chops it up into its constituent parts and mix it up. Throw in some Three Stooges, Mr Magoo, and a sonic trash can of audio detritus , then you get the terrible noise that an eavesdropping alien would be picking up in his satellite dish near Alpha Centuri. This alone would be enough to save us from invasion.
In 1983*, there was definitely a whiff of the need to recycle the old to make something new, like there was with literature in the 60's;Plunderphonics and Hip-Hop being prime examples of this trend.Nechvatal was definitely one of the leaders in rearranging the 20th century's garbage. There's a message in there somewhere for the 21st century,in these last few years of the polar ice caps.

*(Though I have serious doubts that this cassette was released in 1983 on Sound of Pig, 'cus the catalogue number seems to suggest around 1987! But I have no doubt it was at least recorded in 1983.)

Joseph was also kind enough to have created a Wiki page dedicated to the legend of tape noise that is Minóy!(check out some of his many recordings on this blog!)