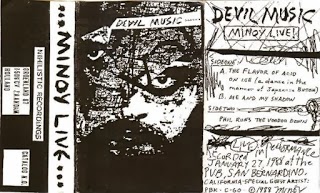 Famed agoraphobic Minoy makes public appearance? An exercise in aversion therapy, or a much needed venting of a repressed urge to perform this profound non-music in public.
Whatever the motive, by the evidence on this cassette, it was a very successful event. Especially having the plug pulled 15 minutes into the performance, with some suggestions from the management of the ‘pub’ that it was ‘Devil Music’. One of the most amusing moments is when some female audience member says something really counter-cultural, like: “Jesus Christ maaaaan what is this? Nazi Germany?”......er......Yes it is, in all but name . Lets not forget where 1% of US citizens are currently residing?.......Yep,thats right, in Jail. Having a population of 300 million, that makes a prison population of approximately 3 million; a total that could rival any dodgy regime ever. That coupled with the American Taliban preaching Christian propaganda in middle dumb-ass American schools, via the ironically named ‘Intelligent Design’ explanation of the universe; which makes even less sense than the 'Deep Thought' computers' conclusion in ‘The Hitch-hikers Guide to the Galaxy’.(42 ,if you didn’t know,or live in middle America). The inexplicable support of the neo-nazi Israel, when there are only less than twice as many Jewish people in America than there are prisoners; which suggests the motives are not to court the Jewish vote, but something a bit more sinister. Why don’t those lamentable ‘politicians’ court the criminal vote by legalising theft.........no, wait a minute, theft is legal; its apparently totally legal for banks to steal taxpayers money to finance their ambitious gambling habits. Not to mention invading any country that produces oil, to ‘protect ‘civilians and promote democracy, but ignoring any African genocide. Which doesn’t suprise me in a country where Black’s (was gonna say black people, but thought it sounded wishy washily white liberal speak), weren’t fully emancipated until the late 1960s; and this lot(the US govt) even love to lecture the rest of the planet on how to be like the ‘land of the free’, sometimes at gun point! I mean, ask Abe Lincoln:

“I will say then that I am not, nor ever have been in favor of bringing about in anyway the social and political equality of the white and black races – that I am not nor ever have been in favor of making voters or jurors of negroes, nor of qualifying them to hold office, nor to intermarry with white people; and I will say in addition to this that there is a physical difference between the white and black races which I believe will forever forbid the two races living together on terms of social and political equality. And inasmuch as they cannot so live, while they do remain together there must be the position of superior and inferior, and I as much as any other man am in favor of having the superior position assigned to the white race. I say upon this occasion I do not perceive that because the white man is to have the superior position the negro should be denied everything.”

There's a statue of this man in Washington!?
This is why we need more of this ‘Devil Music’ (if you are stupid, or from Middle America/ages , the Devil is a superstitious creation to deter anti-social behaviour, and doesn’t exist outside of fiction)performed ,and banned, by the intellectual minnows that are the powers that be.
(Don't be upset if you're american, I love american people, even the rednecks!;and your land.It's just your fucking government,and unelected bodies like the CIA etc that I despise.Just a personal opinion, if any cunt from Texas has a problem with it! He can Fuck right off!)

The music, as performed by Minoy and PBK, is as expected; droning electronics/tapes, permeated by shrieks ,percussion, and Minoys’ unique staccato guitar style. Slightly more rock’n’roll than his home taped works, but I think more provocative as a result. Although the constant murmuring and idle chit chat that permeates the whole of this recording, suggests a certain intransigence from the punters; one can even hear a game of pool in progress at one point in the tape; but it all adds a certain Cagian (as in John Cage) ambience to the proceedings, that only highlights the harrowing bleakness of the music.

That's pretty fucking disappointing about good ol' honest Abe. I can't find it too surprising but I'll be damned if they don't sure light a big bright torch for him... that fucking movie with Daniel Day-Lewis that I couldn't watch because I have a bit of an aversion to anything directed by Spielberg... sorry I just don't like movies that look like that, with those kinds of budgets... they make me sick. I love Day-Lewis though, especially in There Will Be Blood. Pretty interested to hear this Minoy!

OMG HAHAHAHAHAHA YESSSS!!!!!!!! fucking facist pub haha. "For some reason there is a short intermission!" so fucking good

It is rather good,this is what live performances should always be about.
I hate Speilberg too and his sickening sentimentality. Big Budget propaganda machine.