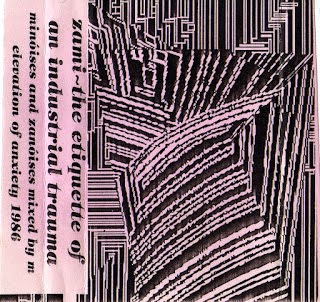 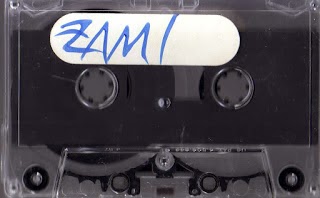 The prolific cassette sonic terrorist Minoy's collaboration with the equally prolific sonic terrorist Zan Hoffman, Minóy\Zannóy aka Zami, produced at least 50 single sided C60's like 'The Etiquette of Industrial Trauma'.The title probably being an analogy for Life, and sounds like a close miked Ice Breaker grinding its way through arctic ice; which is another analogy for life I suppose?


28 minutes of aural phlegm swirling around in a flushing toilet of sound is not usually a tasty treat for the old shell-likes.But when anchored to reality by a disjointed repetitive loop of some dying electronic calliope, it suddenly sounds like a top ten smash. The top ten of what, and in which parallel reality in this crazy ol’ multi-verse is anyones guess.There’s almost certainly a shadow universe out there,where the physics are different,George Bush was strangled at birth,and Minoy/Zannoy are number one; Stephen Hawking has said as much.So take the word of the worlds number one authority on Black Holes,and fill that black hole in your soul with some Zami.

DOWNLOAD some industrial trauma HERE!
Posted by Jonny Zchivago at 11:07

Glad you got your creds sussed.
GWB...strangled at birth?...How do WE go there?

I'd be happy with 'Strangled Now' and his fucking dad too!