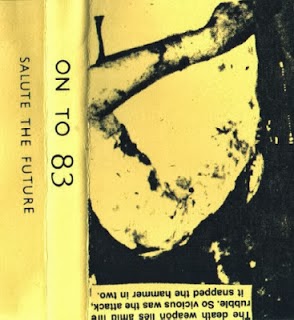 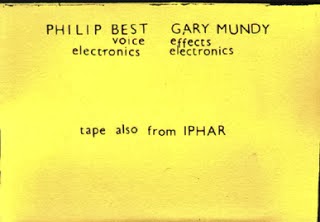 A sense of humour is prevalent in almost all areas of life in the British Isles, but this seems to have been forgotten when it comes to making Industrial music. Although that other British trait, repressed anger, is here in bucket loads. A Power Electronics ‘supergroup’ ,containing early Whitehouse member, and consumer Electronics / Ramleh geezer Philip Best, with the founder of Ramleh and Mr Broken Flag records himself, Gary Mundy. Its the standard Come Organisation style racket ,of skin peeling overloaded electronics and distorted screamed vocals; no doubt screeching about forced non consensual anal sex, murder or Nazi’s. The perpetrators would no doubt be wearing leather trousers, the odd jackbooted synth abuser standing in the background, and appear to be thoroughly unpleasant chaps. The object of the music, would not be to confront the listener with uncomfortable truths, as they would have us believe; but rather to shock,in an increasingly unshockable world; because they can! There are probably millions of people who would be shocked by this, their plebeian sensibilities offended, leading to angry reactions, and gross acts of violence. This stuff could actually cause a drunken mob of outraged proletarians to start burning books,and opening exhibitions of degenerate art. Then there are the fans who misunderstand this music so much that they begin to believe in what these fellows shout and scream about. Although ideologically dodgy, this 23 minute opus is a very enjoyable, even cathartic, experience; if you like that kind of thing.
Play it loud,once.

I hear he has a micropenis too.