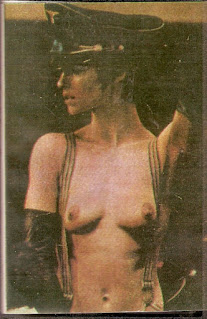 Why is it that most of these skew-whiffed Industrial copyists can't spell?
Also,It is said that glam blond nazi battleaxe,Irma Grese,used to prowl around the lice ridden accomodation of Auschwitz with her Tits out looking for sex slaves of all gender types, to pleasure her before she had them killed once they had literally outlived their usefullness.......which was utter crap,and just another small chapter in mythologising The Holocaust, turning it into something to rival the gods of ancient Greece.So much mispreporting, fact distortion, and just pure 'making stuff up' has become accepted as fact. I won't go into the stuff that would leave me open to accusations of Heresy, but both wings of Nazi folklore has gained all the aspects of a new religion,based on nothing more than our own fantasises and political agenda's, so much so that actual facts have been raked over like the myaterious ashe pits of Treblinka.
John Zewizz, head honcho of Women of the SS, is a kind of Hugh Hefner figure who peddles this bizarre need in people to manifest the spirit of Sado-Masochism in the form of a female camp guard with her knockers out,which will have you running into the gas chambers after pleading to be thoroughly whipped.....apparently this was common behaviour by the Jews,commies,Gays,and Gypo's in the camps....as legend will soon tell us. The new Nazi religion encapsulates all the essentials for God-fearin' folks, there's a Heaven;The Nazi Party & State, a purgatory, The Gestapo prisons, a Hell, The Extermination Camps, and a benevolent God with a wrathful temperament....Uncle Adolf.In fact there ain't much in the Bible that you won't find also happening in the Third Reich
In fact, if the Nazi's had won,there would have been only this one religion,and consequently the end of war....and we'd all have great sex lives,with free shiny boots.....maybe it will still happen.
The sad thing is that John Zewizz would have been put to death for making such degenerate music as this.
Sorry Adolf,but its better than Wagner.....Blasphemy?....i'll start self-flagellating immediately.
Tracklist:

Awsome! DO you have any other stuff from InnerX ? Sleep Camber, 7From Life,Jonathan Briley ect. THanksfor all the great stuff!

"I won't go into the stuff that would leave me open to accusations of heresy." I think you mean accusations of Holocaust denial. When are you going to post some music by a black artist again just so you can say it's shit and call the artist stupid?

Awsome! Do you have any other releases from InnerX? Sleep Chamber, 7 From Life,Johnathan Briley, ect. thanks for all the hard to find downloads!

Thanks for the quik response ! I used to have this stuff on cassete and some on vinyl, havent heard some of it in years, thanks again!

One thing for certain under nazism this puny racket would not be tolerated.

I'm afraid the only real worthwhile or relevant comment to make here is - Christ almighty, Charlotte was hot as fuck.

Cosey Is Hotter than SS said...


"There are those of us who make a bitter pretence of loving life whilst suffering the deepest torment and anguish at sharing any moment with the sentimental herd. Sauntering stupefaction is our lot. A shadowless existence illuminated by the altruistic horrors of charity and compassion.
We are homely, and disfigured by the sheer intensity of our hideous impulses.
Our greatest achievements are validated by their degree of monstrosity. We are as deformed as the compassionate wrath of our wild "God" and are marred only by the curdling curse of remaining human despite our most cruel efforts.
Their can be no kindness in our emotions, no hesitation in our violence. No joy in the blessin and wonders of nature. We are foul, loathsome, offensive, repugnant and harsh.
We are the ugliness, the disconnected. We are the awkward, the disgraceful. We are the uglinuess, the disenchanted."

Americans are the most boring atrocious peasants the world has ever seen...(almost worst than Limeys).

Dear Anonymous......they're always anonymous.....the word heresy can be construed anyway you want it too. I think you'll find I have never denied the Holocaust,so feel free to present any evidence. As for calling Black musicians stupid,i reckon I refered to Benjamin Zephania's debut Dub Ranting a trifle dumb,but any other black musician on here has mostly good reviews...i never do glowing.....just like the White musicians...or are you one of those honkies who like to patronise our Black Brothers? I treat 'em equally awfully as our white brothers.....oh ok then...and sisters. As I am White, I do have a tendancy to only post music from White Culture angle,a tendancy shared ,again, by our Black Brothers...and sisters...who have a heavy tendancy to only listen to Black Music.And what's wrong with that?
More Black music coming up when i return to a spot of Free Jazz....that's beyond criticism as far as i'm concerned....but as you evidently have zero sense of black humour you would probably translate that as racial hatred.
Now as the terminally sexy Nazi godess Irma Grese would have said "Los,Raus"!

@ Head in a box.....jeez you are correct. Pop a swastika armband on most women and they instantly become 'Hot' for some disturbing and inexplicable reason.

@ Cosey Is Hotter than SS.....did Cosey ever wear a nazi armband?

As for your comment, I was disappointed that you hadn't written that yourself.
Good stuff indeed.

@ David Cousar...yes got some 7 from Life, jonathan briley, hideous in strength,and some sleepchamber.....all coming up.Watch this space.

Can't say I find Charlotte Rampling "hot" - to be perfectly frank I think she's one of the dreariest, most wooden actresses who ever had a career.

TG's point in using the Auschwitz chimney as a logo was it didn't look like anything but a chimney, so if you were offended it was only because you'd been told you should be? So I doubt Cosey would have been so unsubtle as to wear a Nazi armband. Except maybe at some of her stripping gigs?

Dear coffee table degenerate art books....I quite like the "White Power" comp cover by a youthful Philip Best of Consumer Electronics.
I did see a video nasty in the 80's called "SS Experiment Camp", that one was even mentioned in the UK Parliament, along with Classic Rape-Chic flick "I Spit On Your Grave", and the best punk movie ever made by a mile..."Driller Killer"

Back to the who's hotter, Cosey or Stevie Nicks debate......What if Nicks was stark buck naked with a Nazi armband and wearing a Waffen SS cap?

As for Charlotte rampling,i find her forgettable,except in the right clothing, or lack of it. She's in a lot of French films....they're the only ones stupid enough to pay her. This is the country that worships Sting after all?

You're all fucked in the head. Charlotte is sexier than Cosey and Stevie combined times 50.

Anyway - yes, please, it's time for some free jazz around here. Might shut some of these dipshits up, since they won't know what or how to say anything about it.

i like this stuff a lot...strangely relaxing. I prefer to the sleep chamber stuff. I hate opinions. People shouldn't have them. Just my opinion.

@ kevinesse....as usual Kevin hits nail on head.This style of Industrial certainly is my muzak. Very relaxing. Same goes for Throbbing Gristle,and a lot of that dark ambient Industrial like Lustmord etc. But saying that as a younger man...and I am a 'Man'....i used to fall asleep to Discharge on my headphones.....and now i complain about going deaf!?
Opinions eh?
I certainly don't like other peoples opinions...especially people who have other peoples' opinions and present them as their own opinions....
Personally my opinions are really a catalyst in the realm of those disclaimers at the end of a movie...any resemblance to actual facts or real events are purely accidental.
ps, its funny how a pair of Tits get lots of opinions flowing in the comments box innit?

yeah Head in a box, Free Jazz and Improv is the shit....and should lift my 'Black' quota up to satisfy the finger pointers.

Never could get into Zewizz's "fetish" project, or any of that "Psychic Temple" nonsense, or any of the "thee's" and that ridiculous made up language.

Certainly laughable Jonny would be a "holocaust denier" fuck right off.

You ALWAYS get more comments when tits are in the picture!