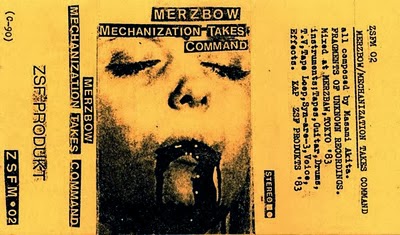 So here's an early cassette release from Masami Akita's Merzbow project,on his ZSF Produckt label from 1983. Not created in his mother's basement,or his Uncle's Garage, but in his own Merzbau studio,in Tokyo, from many fragments of unknown recording found lying casually around chez Merzbow.
Personally,I prefer the earlier Merzbow Style,its less dependant on shear paint stripping Noise. Its more an interestingly constructed random mess of tape loops, found sounds,guitar,electronics,even real drums, and....er.....paint stripping noise!
This C90 is the sound of Hiroshima after the bomb; full of shock waves,overloading Geiger Counters,harmonizing with the screams of survivors envying the dead. A portrayal of a society malfunctioning slowly to self destruction; pretty much the soundtrack to whats happening NOW!
Life is Horrific, when you take a couple of paces back to get the whole grim reality of it all.Merzbow's music, and I call it music advisedly, is the aural equivalent of Francis Bacon's "Three Studies For Figures At The Base Of A Crucifixtion " .