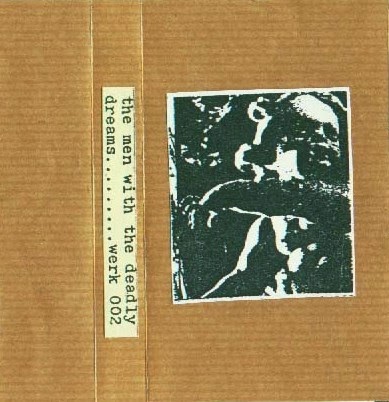 Ultra scarce compilation tape released by Geoff Rushton whilst producing his fanzine 'Stabmental' in 1981.
Produced by Chris Watson in May/June 1981, it includes two rare tracks from the long forgotten enigma that was Rema Rema.A droning bass driven dirge call "Why Ask Why", and 8 minutes of staccato Bass twanging with Kenny Morris style drumming(by Max aka Dorothy) that is called simply,"Christopher". Rema Rema were famed for the excellent "Wheel In The Roses" ep on 4AD, and more so for containing the infamous,or rather the Not famous,'Dorothy' in its ranks; the co-creator of the sublime Dorothy single on Industrial Records. Also contained within this group was one Marco Pironi,late of the Banshees and the Models, and later to find fame in Adam and the Ants.(Also credited with some stupid statement about how he lost interest in 'punk rock' when his little clique was infiltrated by 'us', and ruined it for him......ahhhh diddums; and here's me thinking it was elitism that ruined punk rock'....well, that and all the main bands selling out to the 'man!!)
There are two impossibly rare solo tracks from Cabaret Voltaire's Chris Watson and Richard H. Kirk. Watson's 'News Cut up 2/5/81 is an almost danceable industrial disco number, with relentless 808 deprogramming,and bubbling electronics, which point towards "2x45" era Cabs.
Whereas Richard H. Kirk's "Powermad" looks back to the proto-cabs sound of "Disposable Half-Truths", swapping clarinet for alto sax,improvising over a fuzzy rhythm-scape.
Throbbing Gristle's Chris Carter makes a rare solo appearance as well, with a rather creepy number called "climbing",complete with 'gristlised' electronics, merged with Diamanda Galas style screeching,and disembodied drum fondling.
Eyeless In Gaza go 'Industrial' with their track "Pale Saints",which sounds not unlike a combination of the Chris Carter and Richard H. Kirk numbers.
Culturcide, the crazily monikered M A Peacock and A House, all tread the same turf, with plenty of found sound cut up techniques a-plenty.
In all, a highly consistent compilation, full of lovely early industrial electronic experimentation.
If ever there was a K-Tel compilation of Industrial Music, it would have sounded like this. Mmmmmmm......nice.

Also, to let you know, (and i've been drinking a 'bit') your commentary and writings about each of the recordings in question that you showcase on this blog are certainly on equal level with the quality of the material, at the very least in terms of your knowledge about aspects of the history of this kind of DIY music. So I hope you know that that's something that matters very much, at least to one fan of your work! That being said, I'm anxiously awaiting the hearing of the work in this post, which I may or may not comment on after the 'hearing' of it!

Many thanks Vero,
I do try and make my writing as entertaining as possible;although its not always possible,don't have the time to do it all the time.Some records I find difficult to have anything to say about other than describe the music, which is boring.
I can't type when i'm drunk,so you've done very well.(not that you were drunk of course)
Theres a couple of fantastic compilations to go,then i change tack,back to outsider punk,and original uk DIY stuff; including a trribute to the recently deceased Protag,one of the founders of DIY, who died last week.
love,
JZ

Not sure if your description of Chris Watson's track is meant to be ironic...but I have an original tape and his track is basically as the title, a Burroughs-esque news broadcast cut-up, similar to some of the work he did with The Hafler Trio...

I laughed so much, I left my request for a re-up on an entirely different post.

In reply to a comment above... A Burroughs-esque cut up track on an early industrial tape? Who would have thought it... *smile*

Hi Kosmikino,
impressive comments from you.this is what we want.
Therefore , I am re-upping this thang NOW!
Not in Wav form though, just 320 mp3 i think?
If there are any others need reupping let me know.Its ever since Ubuntu One went tits up.Most have been fixed but....well...y'know.
JZ

Thanks much for this treat