The Violence Half - "The Memory Waltz" - (Nihilistic Recordings) 1988 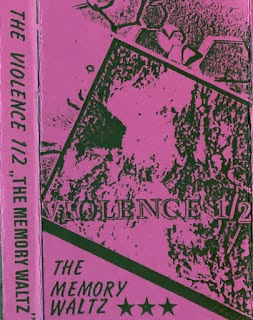 Now what do you get when you cross NotHalf with fellow Canadian avant-gardists, Violence and the Sacred? Correct, The Violence Half. Who made a few collaborations together around 1987/8, one of which is this rather irritating attempt at deconstructing two pieces of music. Lots of tape manipulations involved here: speeding up, slowing down, fingers pressed on to the pinchers, several tapes playing over each other at different speeds, through the usual effects units ; you name it, its being done here.......for nearly one fucking hour! A herky jerky exercise in pretentiousness, but not as annoyingly pretentious as that NewBlockaders tape “Epater les Bourgeois”, which was 90 minutes of cassette hiss. I suppose, if it irritates someone like me it serves a purpose, but basically it outstays its welcome after about five minutes. Worth downloading if you want something to play to get rid of unwanted guests, annoy your wife, or appear ‘intelligent’ to dumb people. An idea that sounds good on paper, but rather ostentatious on cassette tape.