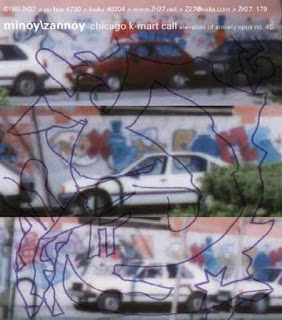 K-mart?.....Isn’t that where American mass shooting psychotics buy all their ammo?
Sure it fucking is! Only in the USA can you go the supermarkets loading this kind of stuff into your shopping cart.
Mmmmm, lets see now, a dozen Twinkies, two for the price of one packs of Corn Dogs, some Oreo’s, oh....and 600 rounds for my AK-47 to express my freedom. A typical American shopping list, guaranteed to kill! Those twinkies and corn dogs are lethal. Here in France, AK-47’s are relatively illegal, and Corn Dogs are definitely forbidden ; punishable by being forced to listen to French Reggae, a fate worse than death believe me!
This one sided C-90 is an attempt to capture the true sound of a K-Mart through the eyes of a shopping cart laden with ammo and all the ingredients to make a Meat Loaf???......Fuck me, do they (americans) have the shittest food on this planet or what?
And after our visit to K-Mart,let’s hang at the Taco Bell, and maybe exercise our cultural right with to a mass shooting?
Rather than go through the hell that a visit to K-Mart, or any other similar consumer temple ,would inevitably lead to,I advise listening to this grinding, scraping classic. Sounding like a close miked shopping trolley with no wheels, being pushed along the aisles of one of these atrocity exhibitions of reasonably priced poisons.

Hi,i'm working on this one,can't find the file. I will have to re-rip it,so you may have to wait a few days,or i may do it this evening.
Cheers,
JZ

Found it! It was nestling in some old mediafire account.
Now re-posted as of 12th june 2015

K-Mart isn't a grocery store and are you really stating that English food is superior to American food (since there is no "American" food)! I would guess that you'll next talk about the superiority of English dental care. Making up shit (generalizing) is Trumps game. I thought you were better than this :)

If having a set of ultra violet plastic teeth is superior dental care, then America wins hands down. they also win on similar generalisations like fatness and Stupidity.
American food= twinkies, corn dogs, deep pan pizza's, Taco Bell
the american vision of English food is stuck in the 50's when the UK was broke after borrowing billions of American money to help save the world from Nazi-ism, whereas the actual Axis powers got billions of american money for free!......its very different now.....we now also eat the same shit as americans, except chlorinated chicken, and steroid infused beef etc are all banned while we are still in the EU.
No I'm not better than that, but at least i'm not orange like trump, and have my own actual teeth.