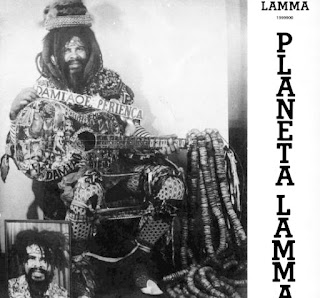 Every country has their own Jandek don't they?......if not, then they should.
To keep with our short Brazilian theme, here's Brazil's Jandek ; Damião Ferreira Da Cruz aka Damião Experiença.
He's a sort of Rasta Moondog, crossed with Father Yod, Harry Smith's Anthology of American Folk, and, of course, Jandek.
Except, whereas the famed Corwood representative sounds mentally disturbed, Mr Damião Ferreira Da Cruz just sounds.....er......Mental........but, in a joyful way. The kind of mentalist that gave the psychiatric Hospital the jolly moniker "The Happy House".
The actual reality is that all psychiatric units are full of 'Jandeks' and not happy rasta types.
Naturally, like the aforementioned musical references, this stuff is an acquired taste, and i must admit running through this thing to edit it, I almost gave up breathing just to free myself from it. This is always a recommendation, because most of my favourite artists had the same effect on me the first time I heard them.
To give this a label is an insult, but i'll try to use something other than 'Other'; so lets go for Outsider Psychedelic Folk?

Who was/is your country's Jandek?
(I'm going for Edward Barton for the UK, or maybe James Blunt?)

DOWNLOAD from planeta lamma HERE!
Posted by Jonny Zchivago at 17:32

I'd say Richard Dawson is like a more tuneful Jandek.

Just checked him out, and there are aspects 'Jandekian', although in a Jools Hollands Hootenanny kind of way. I can see Lenny Henry,Doctor Scroat and that tit from Bottom tapping their feet to this chap.

I suppose that's a fair critique...

Mr. Epp & the Calculation -
(that is, if the Pacific NW secedes from the rest of the US when Trump assumes dictatorship)

Most of the cleverer parts of the USA should secede from the rest anyway, Trump or no Trump.How the hell anyone can live in the same country as the idiots in the bible belt I dunno!
Mr Epp and the Calculation sound a bit too much like they know what they are doing to me. Good stuff though.....like that song about the Mohawk Man.Those bastards ruined my favourite music.

Pip Proud is Australias Jandek. Still thinking about Germanys Jandek though. Das Tönende S.Y.P.H.-Buch has some Jandekian qualities, but it's a group work ...

Fuckin Hell....just listened to pip Proud. He has that, 'is he for real' quality, that Jandek has,along with an apparent lack of musical ability. I must find some of his records.
Germany's Jandek is something I await eagerly.....I do discourage group works even if adorned with qualities Jandekian.....I may submit that adjective for inclusion in the Oxford Dictionary.

Kzra, I was running those same Cascadian succession thoughts through my head just last night.
Didn't know Epp / calculation, so thanks for that.

Pip Proud was pretty Jandeky alright. Along those lines, the Shaggs were possibly even more so. In their case, closer to Jandette, however.

Hey, everyoneislistening [i.e. Bob Dylarama]-
Awesome! I think Epp is the where a lot of ideas collided and took a new shape.
Glad there's a fellow NW'er here. Buckle down....;)
thanks JZ

Reynols are the Jandek of Argentina.

Oh alright.....some groups are allowed.and Reynols are one of 'em. Thats most of South America covered now.

I nominate Joseph Spence as caribbean Jandek (crossed with a Muppet). https://www.youtube.com/watch?v=dmDybuYTuoM

This Arto Lindsay concert has some jandek like elements in it
https://www.youtube.com/watch?v=12ANM-swVNE

I'm originally from Brazil and I've always loved this guy.. I know people who have worked with him, one cool fact about this guy - he lived on the streets and would use money from donations to record his albums. A lot of the old albums were pressed on vinyl using recycled vinyl and cardboard cover so the cost would be much lower for him. :)

Awesome! It recalls me Iuchi Kengo (井内賢吾) from Japan, I share his masterpiece here:

Do you have any of Ed Baton's msuic to post on the blog?

One assumes you mean Edward Barton? Indeed one has. But you may have to wait a while before its Edwards turn.