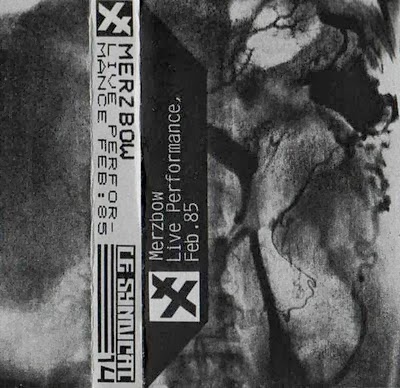 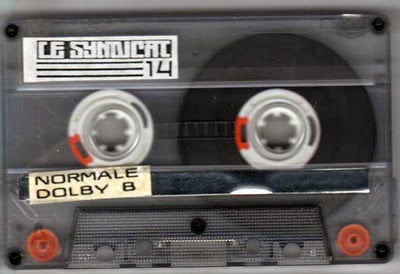 "Heavy Metal shouldn't be recorded in Dobly!"........Wrong Mrs St.Hubbins, but correct when referring to a Merzbow Cassette! This shear flesh peeling noise has an unappealing muffled quality when the Dolby 'B' button is pressed which I kin of like, but,lessens the ear splitting impact.
Sounds like a ruthless performance from the Merzbow crew here. I can't imagine what the audience, if there was one, were doing for the one hours duration of this concert. No head nodding, no foot tapping, no encore calling went on I wager; how refreshing is that? The traditions of the standard 'Rock' gig are too boring and predicatable for my meagre vocabulary to slap down!
But the fact that this was recorded at Merzbau studio,suggests to me that there was no audience at all anyway. This was a 'Live' studio recording, much in the vein of Throbbing Gristle's "Heathern Earth" album from 1980.
The sounds on this tape makes Throbbing Gristle sound like Enya, with its iPhone in a food blender noises, stretched tape loops played back on a belt sander.........christ,I'm running out of adjectives for this stuff. I think I'll call it a day for the Merzbow stuff and move on to some Sun City Girls tomorrow.
I'll sign off by simply saying that this is good,and you should train your brain to like it if it don't; but if it does already,then I'm wasting my time and yours. Just download it and enjoy,if enjoy is the right word for this unpleasant racket.

Download this 'Live' Performance from 1985 HERE!
Posted by Jonny Zchivago at 14:02