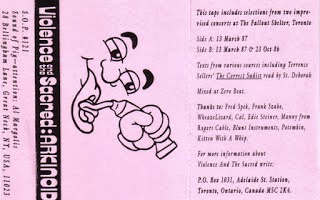 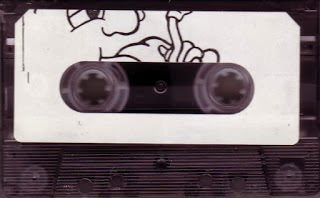 If one should let loose a bunch of chimpanzees on an array of guitars, synthesizers, mixing desk, violin etc; something akin to the chimps tea party, but with musical instruments. One could possibly end up with a piece of improv like this 1987 outing by Violence and the Sacred, live in Toronto.
If you had an infinite number of monkeys, with an infinite number of instruments, they’d probably create a train wreck like Rick Wakeman’s ‘Journey to the Centre of the Earth’ or something equally as flaccid. But this is what you get with only 100,000 monkeys, or four or five human beings, exploring the art of random. Lots of fingernail on blackboard scraping guitars, violins that sound like tortured cats, synthesizer knob twiddling, text narration by lottery, and plenty banal found sound Tape mixing .
You have to give it to ‘em, they are trying very hard to not replicate anything that has gone before, which in 1987 was starting to be a very difficult thing to achieve. They were a sort of genetically damaged hybrid between AMM, Derek Bailey, and Throbbing Gristle(?); that lumps them into the dreaded “80s Canadian Improv” bracket, and what’s wrong with that?

I FUCKING LOVE THIS!!! "a boulder rolled down on top of him" haha brilliant! Thanks as usual Mr Zchivago. Probably my favorite of this Violence and the Sacred lot.