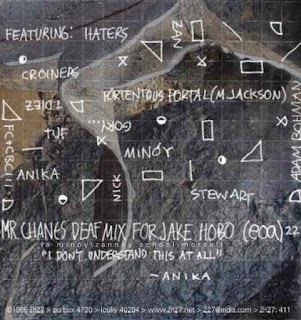 This is what those guys hear in their heads, y’know , the ones that cover the walls of their house in aluminium foil to stop their minds being probed? Certain persons have to take serious anti-psychotic medication to stop music like this occurring naturally, this is basically the world music for the 21stcentury,or even Nu-Folk with telepathy in place of song. It conveys what it feels like to be alive in an increasingly impersonal environment,where ones relationships are formed in isolation via a plasma screen. This is the inescapable cancerous throb of microwaves chopping up your genetic code,and rearranging it as the next mutation in this planets evolution. Or is it the sound of mankind’s last scream before the planet saves itself by bringing forth another mass extinction, like a human immune system would remove a bacterial infection. Either way, the future looks black, and I’m gonna cover my walls with Aluminium foil. “Why won't the voices Sttttttoooooopppppp!!??”
Maybe because I didn’t press the stop button!?

DOWNLOAD this music for the deaf HERE!
Posted by Jonny Zchivago at 23:42

4 shared has been sacked off, replaced with the slightly less shit mediafire.