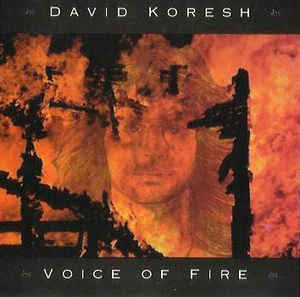 Vernon Wayne Howell, otherwise known as David Koresh, or Jesus, thought of himself as a minor rock star,and before he immolated himself ,his many kids,and followers to death in the Davidian Cult HQ in Waco.Where he recorded lots of terrible adult orientated rock numbers for posterity.
When Dave wasn't exercising his exclusive rights to have sex with all the female members of the sect, be they under-age or married, Koresh, plugged in his axe into his massive PA system and wrote some soft rock ballads in tribute to the glory of God....ie himself.
Apparently he had a tough childhood, an estranged paedophile for a father,abandoned by mummy, and learning difficulties.So poor lickle Vernon was ripe pickings for the esteem raising possibilities of cult leadership.
Once enthroned at the Davidian ranch HQ, he even got away with attempting to murder his rival for the throne,who was found guilty of murdering another group member. Koresh, got off the attempted murder trial on a technicality, leaving him free to attain living god status, and sing his tunes to an adoring audience of his own children. He fathered over a bakers dozen worth of children, mainly bore by the wives of his followers, and in some cases the children of the very same people.He was free from prosecution because he had the consent of the parents to have sex with their daughters!?.....yep, this was in Texas.
The famous seige began in 1993 with a raid by the  Bureau of Alcohol, Tobacco and Firearms looking for guns...and they found them.Generally in the hands of demented brainwashed cultists shooting in their general direction, killing four agents!
A stand off ensued with the FBI, while our Dave wrote his massive 12 page theological statement about the Seven Seals (whatever they are?),which took days to write,the slowness of which was excused by the fact that he had difficulty spelling......yes thats right, Jesus can't spell!?

I must warn you that several of the sect's members said that they were recruited by Koresh's music, so, listen with caution,or you too could have your girlfriend,wife, or daughter knocked up by a varifocaled,mullet sporting messiah.Then burned to death in a hopeless face off with the authorities.

DOWNLOAD the wacko from waco HERE!
Posted by Jonny Zchivago at 07:58

Purportedly Koresh viewed shred guitarist Steve Vai as his musical nemesis. Mr. Vai was likely unaware of this. But apparently Koresh believed Vai was wrongly placed atop the pedestal of guitar god worship that he, Koresh, rightly belonged on.

You know what, I agree with Dave on that one.

Ahhh! The link died... Any suggestions??

Hi Gustav....yeah i'd made a duff copy of the link....now fixed. Feel free to download the complete available works of the messiah as of now.

Could you please repost the dead link that doesn't work?

Perhaps if Vernon had been obsessed with Derek Bailey, or if he'd taken Ozzie's suicide solution to heart personally, none of this would have taken place. I guess cult leader is a magnet for souls who themselves feel ill-used. Beyond that....Pheeeew....

If verne had read these less troubled pages, maybe he would have at least saved us from his ill informed musical abhorations at least.Maybe even turned in to less of an arsehole?...more likely he would have gone on a mission to kill anybody who was featured here,and anyone who left a comment....so feel lucky he's nothing more than a carbonized corpse these days.

In case the dead link gets reposted, here a temporary zippyshare link you for the use of....
https://www30.zippyshare.com/v/MGCStVkc/file.html

Restored mediafire worked thanks! And thanks as ever for all the lovely stuff on here PLUS your writing...!!!

In Verne's case, it would have been better for dust to remain dust.

Angel dust. Ha ha. ☻ Sorry I really have no idea what's being talked about. Oi.

This is stolen music. My sister and I have never gotten any of the money they claimed would go to us

Such Wisdom! Yeah I just googled ya.
You only get money from album releases if they make any profit,especially dodgy boots like this one.

missing the point, asshole. I have not exploited shit to get any money from this situation in spite of it still having horrible issues in my family today. you can use google? wow, why you might be asinine and commonplace enough to misconstrue everything I say. Have at it.

Nevermind, I'll just take everything you've said in jest and believe you arent so daft as to not be so removed from honesty and nuance were you to be confronted. It is just so hard having jesus and god on my case all of the time, you know? I try to kill myself and I just rise from the dead after several fucking days and it is a fucking pain!!!
and the compulsion to collect guns has just made me a fucking homo who collects soggy rubbers.

Hehe,i'm getting trolled by a Koresh offspring brilliant, keep going.
I rather think its you that's missing the point.I'm not aware of accusing you of exploiting anything for money....you brought it up not me?
Call me an Idiot again will you? or a commonplace Idiot...even better.