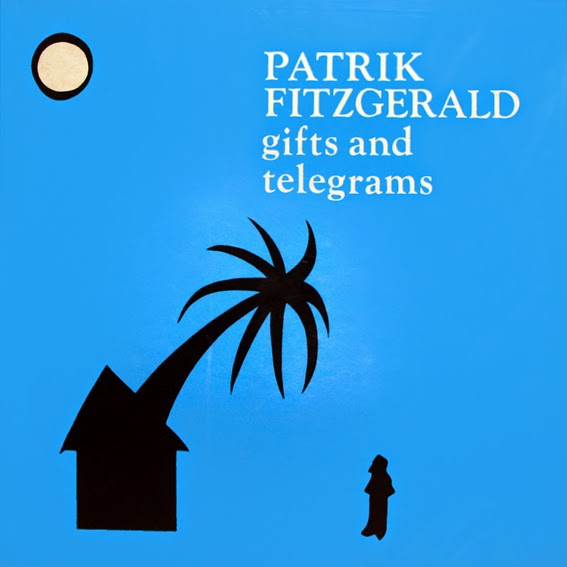 Nothing to do with the Astronauts,but their “Pranksters in Revolt” EP reminded me of this minimal electronic urban folk classic.


Why Fitzgerald isn't mentioned in the same breath as rediscovered folky genii as Bill Fay, Judee Sill, and Nick Drake I will never understand. Maybe because he didn't die an early death,or be championed by some boring pop star,who knows?


His disastrous career can be summed up in his song “All the Years of Trying(mp3)” from his souped up major label début “Grubby Stories”.(He was dropped when no-one bought it)


“Gifts and Telegrams” however,is the opposite of “Grubby Stories”,there are no new wave illuminatti backing him up, just a few cheap bontempi organs and a crap drum machine. Gone also is the trademark battered solo acoustic guitar, but, most importantly, the negative pessimistic lyrics remain. This belated second album,released three years after the Polydor debaclé on indie label, Red Flame; couldn't sound more different to his previous recorded output. A Career resurrection this would never be. A minimal, bitter, downer of an LP, that would probably lose whoever bought the first album, if they remembered him at all, and further alienate the remainder of the “public”.


As a poet,(he was hyped as a”Punk” poet in his early days) he is an uber-realist ,concentrating on the taboo's of the human condition, the hopelessness, pointlessness of existence.


A cover of Jacque Brel's “My Death” fits in nicely with his perspective. But, unlike Brel, life's high's are edited out of his own songs. This is really a version of Patrik's “hero”, David Bowie('s) solo spot on the Ziggy Stardust tour. Almost replicating Bowie's version exactly, which is a low point on this ,otherwise, great LP.


In the file I have included PF's Peel session from April 10th 1979, which is in the very same style as this recording. So he was developing this style for three years before “Gifts and Telegrams” finally surfaced to universal intransigence.


Patrik has had a increase in profile in recent years,apparently he's big in Norway,where a small label assembled big names acts to record a Fitzgerald covers album, including Jello Biafra amongst others. Also I was amused recently to observe a demonstration outside the Boomtown Rats gig at the Roundhouse,where Patrik was supporting said awful group, urging Patrik NOT to play in apartheid Israel!? As much as I agree that Israel should be Isolated from the civilised world, there must be other richer,higher profile,targets to harass. A Racist Zionist's money is as good as anybody's when you're broke.(Mmmmm,but then again.....?......ahh, just leave him alone will ya!?)

A1 One Little Soldier


A4 Travel Through Dark Though Scented Country


A6 World Is Getting Better


B4 Gifts And Telegrams


B6 Island Of Lost Souls

since you asked so nicely, i wrapped this up in some tar for you;

You, mr Anonymous Admirer, is a gent,et un scholar. This is beyond kind.
I will now rest at peace this balmy evening.
Received with thanks.
JZ

Nice one, JZ. Thanks.

Wow! Thanks to both of you.

Calling oneself civilised whilest not part of an apartheid style state isn't!

Can please somebody re-up the Tunisian LP? Link is dead.

Play at least twice before making up your mind.I now love it.

Could you put Drifting Towards Violence LP or Drifting Into Silence up? If you have them.

Hi, its Drifting towards violence, and i have most of it.as it was featured on the 'Treasures from the Wax Museum' compilation;but i will make a files of everything I have of PF and post them here. I am a Fan. He's curremtly recording his 'Farewell' album as he's decided to give up after 'All those years of trying'.

"Treasures from the Wax Museum" (only the tracks from 'Drifting Towards Violence')
http://www.mediafire.com/download/ayxemz35e641fea/Tonight_12%27%27.rar

Thanks for those. This is a great blog!

Jonny, do you need the remaining tracks from Drifting towards violence?
I can upload those.

Hi Zuiop, a complete DTV would be a great thing to have. many thanks in advance.Z

"Treasures from the Wax Museum" (only the tracks from 'Drifting Towards Violence'): the link leads to the Tonight EP.

whoops-a-daisy!
here we go then:
http://www.mediafire.com/download/yvu369t9sahzfyx/Treasures_from_the_Wax_Museum.rar

Deleting clicks!?....this is dedication in its purest form. Much appreciated.
Hate to say it but I like clicks!
Great stuff sir.
many thanks.

Thanks zuiop, you truly are an amazing person.

Love to say it but I hate clicks!

I can send you the following albums to upload as well if you like:

Room Service
Floating Population
Dark Side of the Room

Room Service is particularly hard to get hold of; it was a limited run of 100 copies that I put out on my label Beat Bedsit back in 2000.

yES pLEASE pAUL!...these are the three PF lp's that i do not have. As I describe my self as a PF 'fan', these would be greatly appreciated.
I await like a child on xmas eve.
Cheers M8.
JZ

All we need now is for someone to come forward with Drifting into Silence.

well, Patrik is doing that now, as he's recording his farewell LP with my cyber chum Stephen Surreal......my advice to everyone is DON'T retire!

But just in case you want the Drifting towards violence Lp i'm uploading the fucker now.....will post link asap.

i am sad or stupid or both. There doesn't seem to be the peel session included with 'gifts and telegrams? And thanks for all this I'd never heard of this fella.

No peel session?....he did about five i think, but the disappearance of this one will be investigated. You are neither sad nor stupid if you want to hear more Patrik Fitzgerald.Watch this space.

Hey! Bit late to this but is subliminal alienation still on it's way?

aNY OTHER fITZGERALD ALBUM YOU REQUIRE? i NOW HAVE THE FULL SET.

Fantastic cheers, any Patrik's good to be honest! What else is there?
Just watched this really good docu on him ( https://www.youtube.com/watch?v=Rd_jnyR5f5c&t=107s ) and decided I really ought to get into his stuff.

Actually for that matter do you have his Himalaya record Drifting Into Silence?

THAT'D BE "dRIFTING iNTO vIOLENCE"...HIS BEST WORK IN MY HUMBLES...IS THERE A LINK FOR THST IN THE COMMENTS ABOVE?....WILL RE-UP IN THE MORROW IF NOT?

i'LL POST SOME MORE LINKS FOR OTHER OBSCURE STUFF HERE....DURING THE WEEKEND.

Can you upload Room Service?