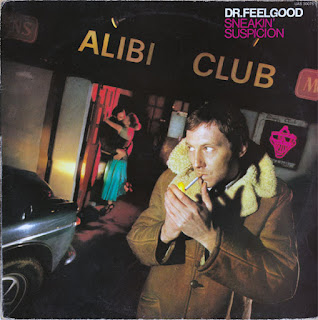 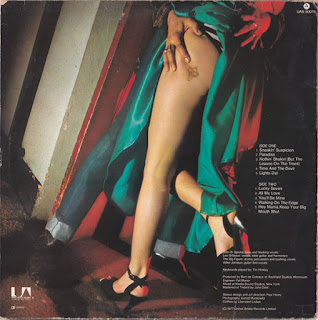 This album was the cause of Wilko's departure, with the arguments over whether to include Johnson's classic "Paradise" or Lee's old mate Lew Lewis's "Lucky 7". Brilleaux's gent's morals were offended by the subject matter of "Paradise", in which Wilko boasts of loving two women at the same time.Maybe this has something to do with the seedy cover art,reflecting how the singer felt about the situation. Maybe he had a point, it does stink of hippy style 'Free Love', and of the four members Wilko was the one who used to have long hair and flirted with psychedelics.
Our fav former teacher ,John Wilkinson, objected to "Lucky 7" purely because he thought it didn't sound like a Feelgood type of song! With which I disagree mildly.
I reckon, Wilko's ego had got out of hand, and he just didn't want anyone else to choose the songs, especially if they were at the expense of his own.He'd become increasingly isolated from the rest of the group, as he didn't drink, but preferred his own company and drugs to hanging around a pub.
Having said that, "Paradise" is one of thee classic Doctor feelgood numbers, and should have been a hit single.In the end both songs were included,so I think song choice was just a side issue to some deeper relationship problems.
As a result of all this boringly predictable band politics, this great album was the end for the classic Doctor Feelgood line up. A fitting epitaph indeed.

DOWNLOAD without suspicion HERE!
Posted by Jonny Zchivago at 09:17

Terrific, I've never heard this one because I was under the impression (wrongly, it turns out) that it was the first with Gypy Mayo. And onto the iPod it goes. Thanks for the post and the backstory.

Got this one on vinyl but thanks for saving me the aggro of converting it. Cheers Jonny

No probs Pinkpress, complete with crackling noises for ya!

Two Gypie Mayo lp's coming up Ian....'Private Practice' is really rather good. Just view it as a different group maybe......or not?

Jonny, thanks for the warning. Interesting how some groups can carry on--often with even greater success--with member changes, and some just can't. Like the Feelgoods, I was done with the Stranglers after Hugh Cornwell left. I like a large part of his solo catalog, but I've seen him live and been disappointed...somebody please tell him he can't do those classic Stranglers tunes without the keyboard parts.

That "view it as a different band thing": I struggled with the Fall for a long time. Then I decided to listen to it as spoken word with musical backing. Now I love the stuff, whatever the hell it is.

Yes interesting, the chemistry of the pop group innit?

The Stranglers lost me around The Raven.
I had the same problem with the Fall, I stopped after "Totale's Turns", and then Brix joined and they became a No-Go area for me. I even saw a video of one of their tunes and MES was 'dancing' in it!?
Then saw them/him with backing band in a small uk pub,in about 1999,after that fight thing, and someone said to me that this is 'white rap'....much like you, its spoken word innit? Then i downloaded all the albums from the 80's that i missed...now like em.The 90's was just shit, But his latest output (2003-present day) just sounds like a drunk bloke fronting a mediocre indie band...total shite. But not as bad as "Fall Fans" groan!Who seem to think whoever they tell should be suitably impressed with their 'weirdness' cred!..."Oh Yeah, well, I'm into the Fall, stuff like that, y'know?...they are usually balding and chubby normals with terrible dress sense and a single earring, wearing a Bend Sinister T-shirt.An alternative model railway enthusiast.

Having said that i do like the idea of a band being bigger than its individual members, and conceptually existing beyond the death of its constituent parts.Like Fairport Convention?....no.... bad example!

PS, on an oblique angle from The Stranglers post Raven, here an absolutely hilarious moment from UK TV, when king of the street punk kids, Mr james Pursey ....did some Avant Garde dance routine to The Stranglers "MeninBlack".....this is really priceless!Link below.....LMFAO

What happened to all the blog links?

haha well it's pretty obvious I like The Fall with my username. I thought of changing it but what the fuck..it popped into my head at the time and I've stuck with it ;-)
I was a big fan from 1978 until the end of the 80s, and I did like quite a bit of the Brix period personally - I think TW&FWOTF was ace - their first (semi)major LP on Beggars Banquet. Some amazing stuff on there.
Diminishing returns since then though I have to admit.

Hey Lube, you're right. They is disappeared!?...nothin' to do with me. will have to investigate!

Pink press Threat....from 'slates' wasn't it...yes i did buy that at the time.Really liked that one.The best post-bramah record?
The only worse 'fans' i've encountered are Residents fans. Always showing off how much they know about the records, and competing as to who was into them first as a rite to be the most 'intelligent' fan.
Personally, i was into the 'mighty' Fall(I hate that prefix!) as soon as i heard "stepping Out" on the john peel show....never got better than that for me...Psycho Mafia then the first LP, which i found slightly disappointing,slowly downhill from there,til it became the Mark E Smith band. Musically it lost that weird edge musically when Bramah left.
I like most of the eighties stuff in hindsight...esp 'Room To Live' (strange one that) and 'perverted by language'....after 1989 forget it.

You have a point about Bramah - brilliant musician - he did come back briefly for the Extricate LP but it was only ever going to be brief owing to the fraught relationship they obviously had. And I guess you're right; that's the story of The Fall. The really important talents fell away and you ended up with a bunch of 'yes' men for the most part instead of collaborators with original ideas. btw I think that "mighty Fall" tag came from Peel originally...a tad irritating, the repetition (pardon the pun) of it over the years, agreed.
I don't really know what a Fall 'fan' looks/sounds like these days...they're a mixed bag I suppose...but you're always going to get your 'I-was-a-fan-before-you-was-a-fan' types with any long-running group inside or outside the mainstream. And The Residents? Jeez where do I begin. Always preferred listening to Snakefinger meself.