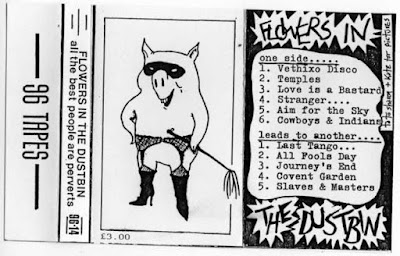 Of course, it should read "All the best perverts are People",not too sure that all of those lovely shiny 'Top' people are pervs...maybe 80% but not ALL of them.They ARE better than us after all.
Having said that, not all the best Punks were perverts it seems.Although heavily influenced by Glam, the Punks didn't seem to follow in the footsteps of Gary Glitter sexually...unless someone knows better.
However, if someone was walking around looking like a 1982 Punk in 1985, one would have to disguise a snigger or two. This means they must be thick? Things had moved on by then,but there was always a few Punky combo's what got through the net, like the sartorially awful  Rubella Ballet,and Flowers in the Dustbin. Both associated with the Anarcho-Punks, but far too 'pop' to be taken seriously,Chumbawumba style.The orthodox Punk look in 1982 was not a good one,and as for the punk music wot da punx liked,with the exception of US Hardcore and Discharge, it was profoundly dull,stuck on repeat for  at least the previous five looooong years,and something to be tossed into the Dustbin along with the flowers.
Comfortably 35 years distant from those times, one can now sit back and enjoy the gothy pop/punk of the long defunct Flowers In The Dustbin. They had the tunes if not the hairstyles to match, but their audience were those living museum pieces that still had blue hair and bondage trousers thinking they were being subversive. These people still exist,nearing 60 years of age,and still dressing like they did as teenagers, but worse still their kids and grand-kids carry on the tradition today!? The new orthodoxy.
Awww cum onnnnnn,its only entertainment innit?.....you know what, it was never thought of as entertainment,until these bloody singers started to complain that no-one was dancing. Then,it became entertainment. We live with the flowers of punk showbiz today...its time to send the fuckers to landfill and it's one thing that shouldn't be endlessly recycled. Flowers In The Dustbin were irrelevant in 1985,and their relations still are.
"Last Tango In Vietnam" is quite a good tune however,and I can imagine a bunch of punx dancing to it in their ignored ghetto's everywhere.
The Track listings on the insert pictured above by the way.
DOWNLOAD some minority entertainment HERE!
Posted by Jonny Zchivago at 23:54

Couldn't stand those bondage trousers by '81, couldn't stand the yelling "Exploited! Barmy Army!" and I couldn't stand the dumb fights with knives and broken bottles and the over dosing on heroine.... '81 Was the year I got out of what was called the punk movement and it was great, so much music to discover and explore, you know what I mean, This Heat, The Contortions, the whole Neue Welle etc., jazz, afro-beat.... But my love for some of the bands out of that early punk bands always endured... The Stranglers, Gang of Four....

Surely, all the famous people are perverts. They have lawyers to get them out of rape/molestation/theft/murder charges. A host of Coronation Street stars have appeared in court, explains a lot with the shitty scripts.

I'm a pervert and I only beat myself up.

I get it, you're trying to get into the "Best People" category via the back entrance/passage?
Without perverts there would ne no Nordic Noir for starters...imagine a world with nothing to watch on TV...kill me now.

Flowers In The Dustbin I always thought was a great name. I had always though it may be a reference to Flowers Of Romance. But that is pure imagination like most things I bring to put onto the dinner table.

Nice! Didn't know they did a tape.
And hey, I wish people still bothered to look a bit different, even it was bad...