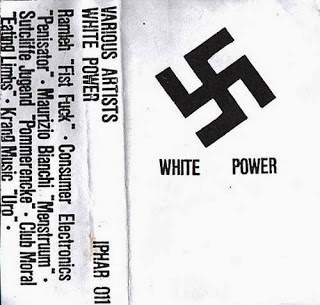 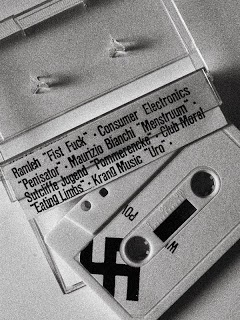 Firstly, even though I don't have to explain myself; I am not(!) a fucking Nazi!!!! (Yawny Yawn Yawwwwwn!) As most cheapo satellite stations will testify, Nazi's sell advertising space, to other Nazi's, of the corporative kind. There's nothing that drags in the audience better than a couple of Swastika's pasted ici et la bas! Without Nazi's we wouldn't have anything to watch on TV;not to mention, Metadone, Crystal Meth, Rockets, Hugo Boss, MK Ultra,Nerve Gas,and the Nazi Disneyland of Auchwitz. But, more important than all of that; all the acts on labels like Broken Flag, Iphar, and Come Organisation, wouldn't have anything to sing about, or put on their record covers. Another thing that a starkly displayed Swastika will also guarantee is a large number of hits for this blog, and some Twat(!) complaining that your blog author is either a Fascist, or a Racist,or both! Even though it may not occur to them that Fascism does not necessarily mean Racism. It is usually those who are guilty of haboring these secret beliefs, the finger pointers, who are the Racist Nazi persons. So, don't bother boring me with your predictable 'right on I am' comments,and look in the mirror. Identify that inner Racist/Nazi before deflecting it onto easy targets. Then you can probably try and cure yourself of these ills.(all comments of this type will be deleted anyway......call it censorship if you will?) As for this excellently offensive cassette, I am always hoping that the flirtation with right wing extremism is just an artistic tool designed for us to confront the darker side of the human condition. This hope is severely tested by the likes of M.B., who is almost definitely a proud Fascist, and Philip Best(Consumer Electronics/Ramleh) looks like he could easily be in the Swingers section of the English Defence League. That said, this compilation, is an exhilarating roller-coaster ride through the best of  extreme Industrial Power Electronics of 1983; a vintage year for such ear bleeding delights. If you're offended by this, then you shouldn't be listening to it, or go and join the fucking Tory/Labour Party or its equivalent, with the rest of the puppets.

what a maroon. big long explanation waste of time to write & read

P.S. YOU ARE REALLY FUCKING STUPID.

It's probably worth noting that M.B. was not a fascist, but an ardent communist with a solid ear for shock value - whence came Symphony for a Genocide and so forth. He later became religious and a lot less melodramatic, but last I checked his music is basically the same, if a little more zen than face-stabby.

Now, Philip Best... is Philip Best. What was he, twelve when he put this out? Such a charming boy!

Yes, this has been pointed out to me before. But NAZi, or the NASDP, does share a lot with Stalinist communisim, 'A' stands for workers, 'S' stands for social, and 'D' is democratic (just like the G7 lot). And The soviets killed more jews than the Hitler lot. So he don't get off that lightly.
As for religious sects.....they probably outscored Hitler and stalin put together!

D is for Deutsche. the nazis had some strong arguments against democrazy from the beginning to the end, they never labelled themselves as democrats. by the way, S is for socialist, not for social (combined with the N, of course). but the tape is great, of course.

and in 1983, the real nazi ian stuart relased a single with his band screwdriver, called white power too. was the philip best tape some kind of an answer?

If we're gonna nit pick, its Skrewdriver with a 'k' not a 'c'....as for the democatic bit, i was probably drunk when i wrote that incorrect waffle,confiused it withe SDP? i'd edit it if i could be bothered.

best write up on this whole bullshit "issue" ever. God bless you

Why, thank you Kevin.

do you own all these mb cassettes? holy crap...and as far as nazees go........I'm pretty sure i'm the last guy any whte power dudes are interested in. Even in full nazi regalia I'd have to answer any criticism like this: "Me. You think I'm a nazi!" it seems so childish...oh well. great blog, great writing ...

ps I'll never be any kind of socialist! ha!

Have you ever had wrongthink comrade?
Ever laugh at a dirty or racial slur joke?
We have A Clockwork Orange treatment for you.