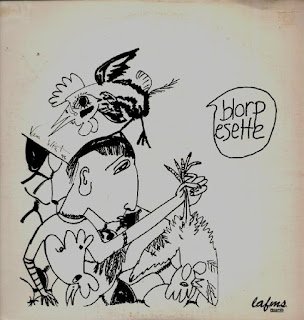 The Iconic compilation from the abstract world of the Los Angeles Free Music Society (LAFMS),complete with faux naive  artwork by none other than Don Van Vliet; that very over-rated painter formerly known as Captain Beefheart, the very under-rated musician.
All the usual combinations of LAFMS members are here,plus an exclusive track from none other than, no not Don Van Vliet, but The Residents, from during the height of their creative summer.
It may have been 1977,but you won't find any Punk Rock on here; having said that, you won't find any Punk Rock as Punk Rock as this either.The boundaries of the definition of music are stretched like the loose elastic of Meat Loafs sweaty underpants. So much so, that when The Residents track appears, they sound like Top Ten material......which of course they should have been?

Ta very much - looking fwd to hearing this in the mornin' :)

Wow! Heard of this back in 1987 when it was mentioned on Residue of the Residents...and here it is!!! Marvelous find!

Yeah,thats where I first heard of it(back in '83 for me). Volume two arrives tonight!

Thanks for putting this up, looking forward to listening to it.

Hey how about some Musical Janeens? I already have them but it would be cool to introduce them to more people. I never understood why nobody seemed to like their album. Any rare stuff by them would be deeply appreciated too.

Thanks a lot. Hope you're recovering well.
Follow what the docs tell you, especially
it they reommend aural rehabilitation ...

Hey, is there a Volume Two of this?

can't thank you enough for this - I can see I am going to develop an unhealthy obsession for Smegma - 'Ya Gotta Geek The Geeker' - clearly a contender for best band name and song title wrapped into one - and my gods, you have already posted an entire album of their music that I missed last year in the form of Glamour Girl 1941 - great, that's my music for riding the bus to work on and disturbing the old lady/schoolgirl/office drone who has the misfortune to sit next to me because there's no seats left.

It really is incredible to think this came out in 1977, the Los Angeles Free Music Society were not just on another planet, but several dimensions away - just astounding.

Apparently Smegma were not from L.A.?...from memory,Portland Oregon;but nonetheless one of the finest from the very fine LAFMS family. Nearly everything this lot(LAFMS) released was inspired,out-there,and great. especially the compilations.I got another couple to post, "Blub Krad",and the Emergency Tape vol.1 and 2.
Most of these geezers are still very active today.

Pardon me for being an annoying know-it-all, but Smegma were indeed from LA, later moving up to Oregon, contributing to the LAFMS from afar.
Alas, I missed it, but Smegma played a show recently here in LA with a number of other Free Music freaks. The LAFMSers play around town fairly frequently. Maybe now They're all retired geezers who finally have the free time to perform.

Bloody Know-it-alls!.....i could have done some research I suppose,but i couldn't be bothered; I stand amended.Very unprofessional, which is ok because i'm not a professional.And that is the whole point of this blog I suppose? Thanks for the info and for keeping me on my toes.

Thanks! This is such a good album... Some of it barely sounds like music, but it's held together by lots of personality. Whoopy Snorp is one of my favorite Residents tracks. Is it for sale today?

Also, is there a place where I can find more Mr. Foon tracks? I like all the ones here the one on vol. 2 is incredible.

Yes fine tune is Whoopy Snorp.....its on The Residue of the Residents which i think is still available?
As for Mr Foon, i doubt very much if there's any product available, beyond any cd versions of Blorp essette, which may have had some bonus tracks i think.