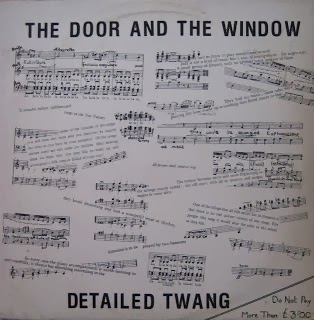 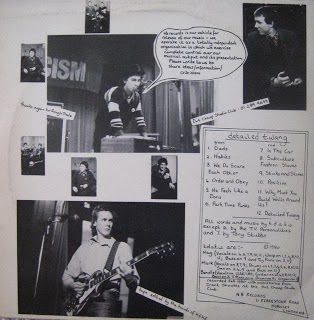 Apparently this sold 10,000 copies in the year of release!! And quite right too. Another musical up-yours to first album ATV fans from the Pope Of Outsider Punk, Mark Perry.
There are very few first wave punk stars who actually practiced what they preached, Mark P was one of these. He took the Rock out of Punk Rock,and this record demonstrates that nicely. Frequent performers at the London Music Collective, Nag and Bendle took the disillusioned Mark under their wing and the rest is history. This LP doesn't Rock!
Check out TDATW's myspace site , Bendle has one too, here.

DOWNLOAD some twang HERE!
Posted by Jonny Zchivago at 12:29

This LP is a total classic DIY recording. Thanks guy!

Apparently to be reissued soon on overground records.

This is fantastic, been ages since I've heard something that's really got me like this! Thanks for uploading this, and this is a dead nerdy question but is there any book that covers this sort of D.I.Y punky/experimental stuff? Thanks again for this!

There is indeed....including one by Bendle of Door and the Window fame himself, called Permanent Transience......and Mark Automaton of Instant Automatons fame....."The Luxury Of Dreams"...there are links to buy in the margins of the blog.......Mark Perry has probably written one too...not sure.
Welcome aboard
JZ

Ah, Sunday fucking Sunday...i love digging into your rear end, err, umm, i mean the rear end of your blog, Jonny, there's so much to find. And, as ver kidz used to say, props to you for using download engines - or whatever the fuck they're called - that still work years later. Not that zippyshare or megaupload shit that died a death long, long ago. Mediafire etc rule.

Christ i mentioned Myspace!?
Yeah, Rapidshare and Megaupload is what did for a large proportion of blogs in 2012....but at least Mega took the FBI to court and won.So now we is safe and legal....Mediafire is the longest running,and the only one that provides download stats......google drive is also a fine vehicle...no matter what you think of them.
However, Mediafire did delete me in 2012....before the court ruling...they are ok now..less panicky....of course i am backed up,so if the worst happens again, i'll be back up the next day.