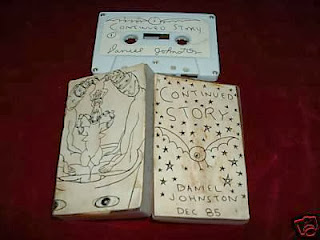 This was recorded around about the time Daniels star was rising due to some exposure on the unforgivably evil MTV! Convinced he was on the verge of mega-stardom he started dropping Acid and turned into an emotional Yo-Yo, and was admitted to Austin state Hospital a year later at xmas 1986. Dosed up with anti-psychotic druggage,the music naturally stopped for about three years, and tragically when his moods stabilized he decamped to New York in search of his due fame; this turned in to a disastrous trip.
Bouyed by the slated release of 'Hi, How Are You' on Blast First in 1988, he arrived in the big apple, spent all his money and stopped taking his medication!His behaviour became completely irrational,which culminated in his beating up of steve Shelley of Sonic Youth,who had even been providing him with accommodation and money. he ended up roaming the streets, camping in homeless shelters,and being arrested for vandalising the Statue of Liberty with anti-satanist graffitti. After alienating the entire alternative arts scene in NYC,he returned to his parents,and resumed his medication...briefly; and many more bouts of anti-social behaviour resulted.
Basically,he should have stayed in the basement, doing what he does best; churning out psychologically revealing homemade cassettes. Don't get involved with those evil corporations,corrupters of great art that they are!
This album is a great swan song for Daniels' early career,if you can call it a career.He was never quite as innocent again; corrupted by ego expanding fame and exposure to unnecessary influences like Sonic Youth.

DOWNLOAD this Continuing Story HERE!
Posted by Jonny Zchivago at 09:18