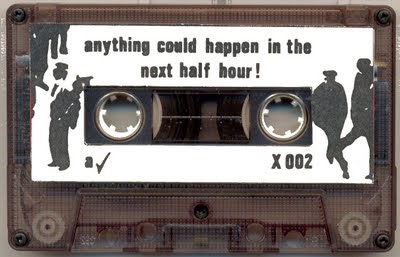 Of course you have read the post about the Reading compilation LP (reposted soon!) "Beyond the River" and downloaded and thoroughly enjoyed the Bands contained there-on? WOT?.......NO!!!...Well,firstly click the link, then check out this even better compilation from the Reading area, released on that wonderful medium that is, the cassette. The wonders of Chrome-dioxide,or even better,Ferric Oxide, gives anything that almost mystical aroma of an archaeological dig; which is funny, 'cus the best band on here are called DiG! dig! DiG!.
Reading based X-Cassettes, were the spiritual predecessors of "Beyond the River", and was established by Chris Green and Richard Griffin (the latter of "No Cure" fanzine fame) to deliver a platform for local bands. And in turn,provided a valuable historical document of an ignored era that would have long disappeared into the aethyr (pronounced Ether).
The label eventually morphed into,consequentially, Open Door Records, then the more famed, Criminal Damage Records,home to such luminaries as ,gulp!, the Membranes, the Leather Nun and Ausgang! 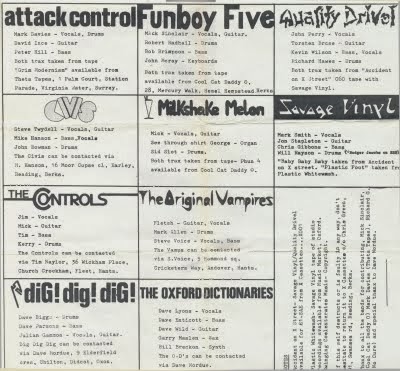 This marvellous cassette, kicks off in parallel universe top 75 mode,with the Original Vampires' and their terminally catchy proto-indie "Hit" , "Johnny Clarke"; I could play this one three times in a row, and maybe even sing-a-along!?
Next we get to trad-DIY with Attack Control and "Half Life". Classic muffled vocals, bedroom guitaring, small room drum sounds, and 16 rpm bass twanging. I love it!
Then, Quality Drivel .....thats the band, but could also be a very adequate dual-adjective for their sound.
This brings us to the best track on the tape, by DiG! dig! DiG!, and their eponymously titled tune. Feel the solid state majesty of the guitar amp circuits frying under the influence of the Andy Gill/Wilko Johnson/Mick Green triumvirate of six string heaven! The approximately tuned bass,and flat drums, accompany this tune in a way only white boy punk/funksters can master; and this should be celebrated.
Savage Vinyl, local rock groop with a following makes live recording type stuff.This was their three minutes...and why not?
The Civi's, lightweight proto indie pop, but enjoyable.
Milkshake Melons are the real deal though. With their Dick Dale on Tamazapan instrumental, "Theme de Melon". Its the sound of a tape being chewed up in the pinchers....genius. Equally great is their Doomsday song..."21C HB"....no, its not about soft leaded pencils either!
Controls, not 'The' Controls, give us some Joy Division tunes played with a Warsaw level of competence, recorded with the audio fidelity of sound boucing off breeze blocks. A sound quality I have always admired, but find it hard to reproduce. "Apprehension" , has an interesting bass,guitar counterpoint,that catches the minds ear, topped off with an X-Factor Ian Curtis singing style, that has no peers in DIY world. (See later in this Blog for a Controls post)
The Funboy Five, are now the most famous band on this cassette.Thanks to being included on one of Chuck Warners "Messthetics" compilations. So 'nuff said about them.
And last, a band that comes a close second to manchesters Bathroom Renovations for having the best band name in DIY land......the Oxford Dictionaries!?.......they're almost as good as Bathroom Renovations too! Listen to the wow and Flutter of this awful recording, and be in awe! They also have a honking sax player too, and NO drummer, which most groups should do without.

Download the rest of this classic tape below....you know you want to! 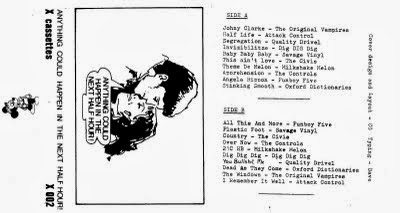 Thanks for this. Love Funboy Five - Life After Death is such a good single.