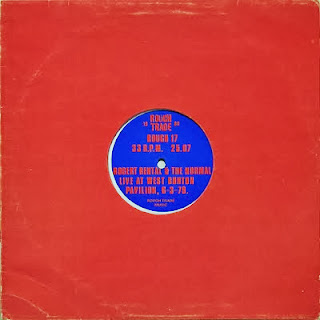 The Normal , aka Daniel Miller, Mute Records impresario, and the genius behind the “Warm Leatherette/TVOD” single mentioned earlier in this blog; teams up with Robert Rental, aka Robert Rental, genius behind the great “Paralysis” single also mentioned earlier in this blog. Wait, it gets weirder, as they played and recorded a live performance in the West Runton Pavillion???? Where the Hell is West Runton? I’m not sure I want to know, it may ruin my fantasy of Robert Rental and The Normal playing avant garde electronic music to the West Runton Octanegerian Knitting and Glee club in some broken down pier theatre in a forgotten seaside town in Kent.
And the icing on this very special cake is completed by its release on one-sided vinyl; side two was smooth and grooveless.....a bit like Brian Ferry.
What were guaranteed to bring out the contempt of the beer swilling Status Quo loving general public were less than three persons on a stage with no guitars or drums in sight. Suicide had made brave advances into no-mans land with their support slot for the Clash European tour in 1978. Frequently being bottled off stage after ten minutes, usually half way through “Frankie Teardrop” (they don’t like being confronted with the truth don’t the ‘Rock’ audience!), an occurrence documented on the great bootleg “23 minutes over Brussels”, supporting Elvis (Costello).
Though one doubts Robert and Daniel were anywhere near as confrontational as Alan Vega, the music alone could make the average ‘Punk’ implode with rage! I’ve never understood this reaction, having pigeon-holed myself as a ‘Punk’ at the time. I think I may have grabbed the wrong end of the stick or something, ‘cus I thought that the attitude of records like this WAS ‘Punk’. Stuff I thought were ‘Punk Rock’ are now labelled things like Post-Punk, Minimal Wave, Cold Wave, Industrial etc..etc. And Punk rock is something very Stupid, in a Leather jacket, with UK Subs spelled out in studs on the rear, and topped off with a Mo-fucking-hican (or if you’re American Mo-fucking-hawk!).

Back to the record!..... Minimal electronics, doubtlessly backed up by pre-prepared tapes played in full view on a Revox B-77 (how honest is that?). There are even some slightly unhinged vocals from, I assume, Robert Rental. This is the golden age of electronic music, before everything became possible, and as a result too many choices leads to shit music; by 1984 it was all over, and electric guitars began to regain lost ground again. But we do still have the recorded proof that synthesisers were once exciting and creative instruments; see “The Pleasure Principle”, “Metamatic”, “ The Bridge” and this one-sided slice of history.

DOWNLOAD a taste of downtown west runton  HERE!
Posted by Jonny Zchivago at 12:22

West Runton Pavilion had a great reputation as a music venue in the '70s, though I'm too young to have visited it myself (not until about 10 years ago anyway!):
http://westruntonpavilion.webs.com/bandsaz.htm