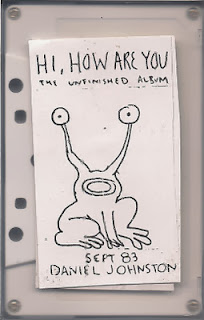 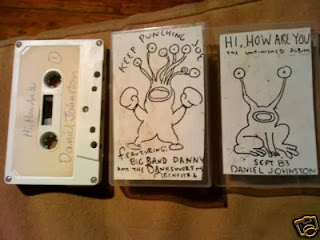 (Info : This was thee most popular post on Die or DIY? 1)

'Hi,How Are You' is Johnston's sixth self-released album, recorded in September 1983. It is arguably his most popular album. Johnston claims he almost had a nervous breakdown recording it and calls this his "unfinished album." Wether the breakdown is unfinished he declined to expand upon.
The album is one of the most sonically varied of Johnston's early output. While earlier records found him focusing on piano or organ songs almost exclusively, this album blends both approaches along with experiments in tape and noise collage, and some tentative guitar playing. Two songs feature Johnston singing along with an Johnny Dankworth LP,thankfully sans Cleo Laine,and this is the best record that Dankworth has appeared on.(I've seen these pair of showroom dummies at the Royal Albert Hall,supporting Sinatra; it was painful,my brain left my body and refused to return for quite some time).Hearing Dan singing "There ain't no spunk left in me", along to the Johnny Dankworth Big Band, in 'Desperate Man Blues', is indeed a sublime moment.
The cover was made 'infamous' by frequent appearances of Corporate Rock Whore Cobain wearing the album image on a t-shirt.This increased sales of Johnston's records, bizarrely, rather than destroying his career, which is what you'd expect normally. I don't get the cult of Cobain one iota, what is it with dead pop stars that makes the human throng so moist? If some hero shot Bono or Chris Martin, we'd see those numpty's blazoned across the chests of a billion teenagers too; now that is a deeply disturbing thought.

To be fair, I think that Cobain wasn't too keen on his assumed role of pop idol either—and I don't say that because of the suicide either. I remember reading an excerpt from an interview where he talked about walking around a supermarket while listening to Half-Japanese on cassette through cheap headphones and I thought, "I know exactly what he's talking about!"

The way I see it, pop stardom is rarely intentional. You know a pop star who wanted to be a pop star on sight, and you know the ones that got "lucky" the same way. And you know what? It looks like a pretty lousy life to lead, especially for someone that actually *has* an internal life. I would take being David Thomas or Charles Hayward over wasting my time trying to impress people any day of the week!

If you don't like being something then don't be it!As much as i don't like Nirvana,it probably isn't the band, or Cobain that irks me most;its those bloody miserable obsessive fans.The Long hair and checked shirt crowd. Cobain and many followers of this blog would undoubtedly get on. But why the awful,whiny derivative punk influenced Rock crap? If he didn't want to be famous make some forward looking unpopular music.
I think he wanted the fame,but was too sensitive to cope with it, and felt the hypocrisy of his message rather too much.Career suicide rather than actual suicide was the answer. Make Metal Machine Music 2 would have fixed it.Sorry Kurt.

I finally had a chance to see Daniel play live in New Orleans recently. He's in pretty rough shape but he was really belting out those lyrics. Very cool to see him backed by a local jazz band with lots of brass.

thanks man! i was looking for these songs.