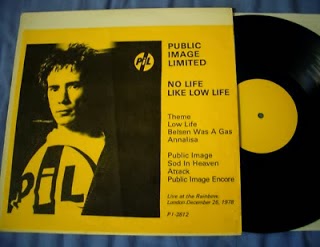 Christmas day 1978 was lacking something for my 14 year old self. My brother and cousin were noticeably absent from the family festivities. Then the gutting news filtered out that they had gone to London to see Johnny Rotten's new group!! Left to watch the Morecambe and Wise Christmas show, while they were lording it down at the Rainbow!
One anecdote sticks in my brain, as relayed by my older sibling, was when a lack of appreciation was evident for support band Basement 5, the droning voice of one J. Rotten was heard over the PA suggesting some activity in this department;
"I hear no applause???", said mr Lydon.
The response of the audience was obedience personified, and they applauded as ordered by their leader. Oh those rebellious punk rockers eh?
As the Christmas day show wasn't bootlegged(which apparently It Was I am now told!?), we'll have to make do with the boxing day show instead. In all its warehouse style acoustic glory.
Lydon, the voice that launched a thousand DIY bands.

Thanks Jonny. Great story too. We mean it MAAAAAN.