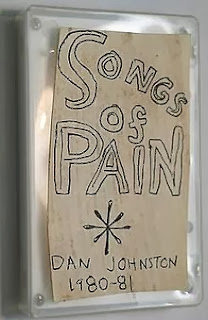 World famous Outsider,Manic depressive,and Schizophrenic loser, Daniel Johnston, was also a shiny star of DIY cassette culture. His childlike songs are quite addictive,and are like open emotional wounds for everyone to peer inside, all sung in a nasally whine that makes you wanna punch somebody.
Songs Of Pain was his first release back in '81, and contains 20 songs bashed out on his mom's piano recorded on a mono cassette recorder in the basement. A damaged but unique talent was just emerging from a cloud of mental illness, and he was soon to be seen hob-nobbing with the glitterati of american Alt-Rock. (Thurston) Moore and Cobain (Kurt) virtually fighting over who heard him first, and who was gonna do a collaboration with little Danny boy. At least he choose relatively well in collaborations, the like minded Jad Fair and Kramer were wise decisions, No-sell out.


DOWNLOAD these Songs Of PAAAAIIIIINNNNN! HERE!
Posted by Jonny Zchivago at 09:31

this one seems to have absented itself. :(

Daniel never hobnobbed with Kurt Cobain and there was no fight over who heard him first. It was Thurston. Don't make shit up.

PS: Not one of the Daniel tapes you've pictured are self-released versions. These are all on Stress Records.

Oops, I have to take that last comment back. It looks like the Yip/Jump Music and Continued Story tapes are the self-released versions. The rest are on Stress.

any possibility of a re-up on google drive?

thanks a lot! from Spain