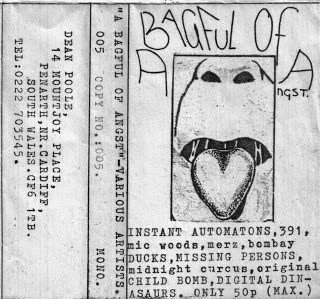 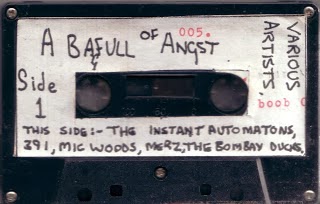 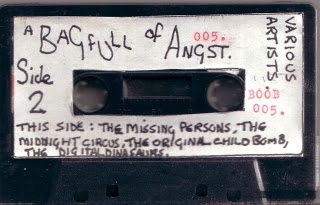 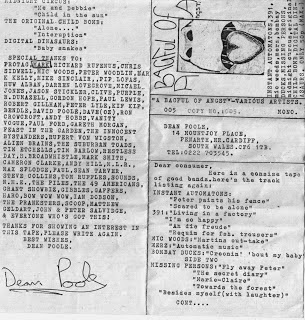 Here we have a “Bagfull of Angst” , on an umarked cassette label run by Dean Poole from South Wales. A fine selection of Street Level and Deleted Records artistes, recorded in glorious Mono, harking back to the halcyon mono days of Dr. Feelgood. A fine compilation, so I won’t rant on  about the purity of this music, instead you get an uninspired running commentary of the tracks contained within this compact package of UK DIY classics.
The Instant Automatons kick off the proceedings with a live rendition of Humberside Delta Reggae classic,“Peter paints his Fence” fused with “Scared to be alone”. I assume they were fused together deliberately as they share the very same pre-programmed el cheapo drum box beat;....and why not? A surprisingly unsparce sprinkling of mild applause follows!
Mark Automaton continues to hog side one with “side” project, 391, with "Living in a Factory", which is an ethereal meeting of Joe Meek and a ring modulator.Then , some classic anti-sunshine pop with the post ironic "I'm so Happy"; followed by a de-nazified version of Beethoven's Nineth via a Scunthorpe working mens club band on a cocktail of Laudenum and Peyote. A touching peon to the Fashionable Trousers cassette label winds up Mark Automaton's contribution very nicely indeed.After Instant Automatons mate Mic Woods' muffled hippie punk, we get the chance for Protag's side project Merz, to provide us with a fuzzy flange-fest of Automatic Music, before we end side one with the chaos of The Bombay Ducks, about whom I know little, but I do recognize the familiar honking of that saxophone; I suspect I have heard that horn on one, or several, of the Instant Automatons recordings!
Side 1 is an almost perfect compilation, but side Two does start with what seems like a recording of some awful hippie warbling with some kind person accidentally leaning on the erase button after ten seconds into the song. It doesn't get any better for the whole of the Missing Persons 5 song contribution! I'm sure they weren't as bad as this on the other stuff of theirs that I've heard! "Besides myself with laughter", the fifth tune from said band, is without doubt one of the most annoyingly unfunny tunes I've ever had the misfortune to be exposed to! But if you like the sound of long haired sixth form students mucking about in the common room in between Genesis albums, then this is undoubtedly for you!
Not for the first time we are saved by Leicester DIY legends The Midnight Circus, hammering out a couple of anthems on their cheap guitars and their ,unbettered, plastic bucket and boxes rhythm section.
The bizarrely named The Original Child Bomb, follow with a couple of Fuzz punk monoliths that verge on the realm of Fireball XL5 at times; but that's good isn't it?
Coventry's sole reason for existence has to be the Digital Dinosaurs? If the Luftwaffe tried to flatten those sweeping concrete flyovers, and tasteless shopping centres, we'd all applaud, but no force on the planet can erase the classic songs from those Donovan devotees that gave us "Baby Snakes"; now come on, even Hitler would get down to this little number....surely?

DOWNLOAD a bagful of angst HERE!
Posted by Jonny Zchivago at 00:06

So there I am, settling down to watch BBC1 teatime quiz show Pointless, when who should appear as contestants but the legendary Mark Automaton and Mrs Automaton... I was absolutely stunned! I cheered them all the way to the final, only for them to be stumped on naming songs by Adele! I have to say they did far better than I could have done on that particular subject.

I know you drop in here, Mark, so I just wanted to say well done, mate.
Low Down Kids said...

As soon as it was announced that the question was about Adele songs you could see Mark's heart sink. If it'd been about Danny & The Dressmakers he'd have been quids-in.
15 April 2013 20:38
Mark Automaton said...

Hi folks - yes, my Pointless appearance must have come as quite a shock to a few people. Even more bizarrely, there was a guy in the studio audience who had not only bought a copy of "Peter Paints His Fence", but had also seen us play live in Shepherds Bush! It's a small world. And as for bloody Adele - well, the less said about that, the better.
15 April 2013 21:48

Such a great tape, thanks a million! Do you happen to know where I can get Vol. 2???

Hi Wolfgang,
i've never seen or heard Vol 2!...I live in hope though. I think there's a CD-r doing the rounds.