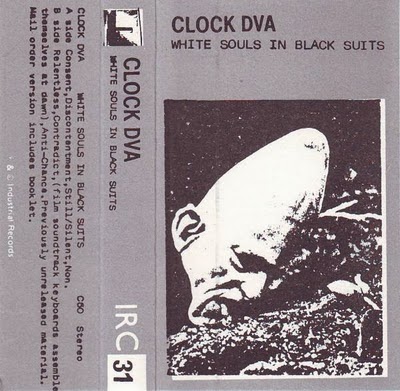 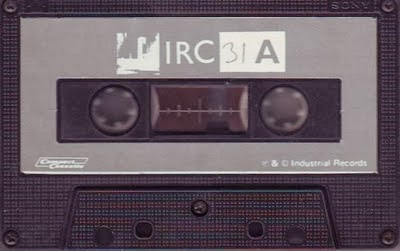 "Clock DVAs first release came on Throbbing Gristle's Industrial Records in the form of the "White Souls in Black Suits" cassette in 1980.The album itself is a raw pre-amble prior to the Formation of Thirst. Taken from fifteen hours(!) of improvisational sessions, a five member version of DVA recorded the sessions via a mobile recording unit.The album was mixed and produced at Cabaret Voltaire's Western Works studio,and includes a tape montage sequence in collaboration with Chris Watson. Richard H Kirk and Stephen Mallinder engineered and co-produced in collaboration with DVA." (Die or DIY 1 write up from 2009)

What a fucking boring write up!....I must have lazily cut and pasted this from somewhere else? I apologise and normal service will be resumed on the next post.
However, on the deleted version of this blog, This tape was one of the DCMA complaints that got me kicked off the web by the 'Arseholes in black suits.
I got all this backed up so go on and delete me again ,it'll all be back on the interweb the next day!
Never liked Clock DVA anyway. Didn't they go sort of disco later on?

ps, Has anyone got a digital copy of communist Czechoslovakia’s official state 'Soul' group ; The Flamingo Group's album from about 1970, called,and this has to be the best album title of all time or what(?)....."This is Our Soul".....wow!
I picked that up for FREE if i bought another album from Ultima Thule in Leicester;can't remember what i bought, but this stole the limelight somewhat.
Fucking lost it didn't I?....so help.
Oh yeah.....here's Clock DVA....Yawn!

(Update...relax everyone.I have now found another copy of "This is Our Soul").

DOWNLOAD OUR SOULS in black suits here!
Posted by Jonny Zchivago at 22:02

In my humble opinion, best group ever. Only a little clarification.
This is not their first release.
Here the list of their previous releases:
"Lomticks Of Time" (1978) Private Edition MC-60 DVATION 01 [UK].
"2nd" (1978) Private Edition MC-90 DVATION 02 [UK].
"Sex Works Beyond Entanglement" (1979) Recorded at the DVAtion Studio on the 24th and 25th of March 1979 and originally intended for release as 12" EP "Sex Works Beyond Entanglement" on Small Wonder Records. Another track intended for release on the EP called "Coil" ceases to exist in a strange and mysterious sense.
"Deep Floor" (1979) PTI MC-60 DVATION 03 [UK].
"Fragment" (1980) alternatively titled "Agony" ltd. edition MC-60 DVATION 04 [UK]. Recorded at Western Works, October 1979.
"Group Fragments" released in March 1980 as re-edited version of the Western Works Demos.
All the best.
Carlo

all of the above is a boxset on Vinyl On Demand

So it was their first release after all then?

As far as I know, the very first release of Clock DVA was the cassette "The Texas Chainsaw Massacre" (1978), really a strange (and not so good) item.
Thank you.
Robert

Mind you, I quite like their (ahem) "arseholes in black suits"-era too, especially their Peel session, which still gives me the shivers.

That Vinyl On Demand box-set is mind-bogglingly great, it's tragic that those recordings are (still) so difficult to come by, & cDVA remain one of the '80s biggest secrets as a result. :(

I HAVE FILES OF TWO EARLY PRIVATE RELEASE TAPES BY THE DVA. i MAY AS WELL POST THEM. SOMETHING BASED ON THE tEXAS cHAINSAW MASSACRE AND ONE WITH THAT TRACK FROM 'hICKS FROM THE sTIX' ON IT.
i LIKE 'EM REALLY.

I had Hicks from the Sticks, but i have mislaid two tracks, but I do have the single versions of these tracks!!(don't ask me how this happened!) So I will post a slightly different version of said LP.
The vinyl i had is long sold so I can't re-rip it.

The White Noise App has been designed to help you get to sleep more quickly, and to help you to stay asleep for longer.