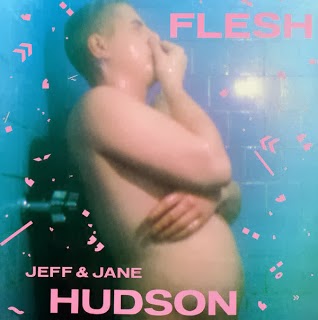 When I first saw this record in the rack, I envisioned a group of four young men with a ‘cool’ band name; and what a ‘cool’ band name is Jeff and Jane Hudson?
But, No! Its actually a record by none other than….er…Jeff and Jane Hudson, aka, Mr and Mrs Hudson. Having seen a picture of them, they look exactly like a husband and wife; you know the type, slightly missed the boat late comer Trendies who are completely self-unaware. Frankly, they’d be laughed at on X-Factor…..but NOT here, for they have the (d.i.) Y factor in shovel loads. They are soooo not Pop that the loving couple with the naff clothes are soooo good.
Also surprising is the great slabs of minimalist electronic pop that they churned out in the early eighties.
Americans doing well in Belgium, the spiritual home of minimal synth music, is not something you hear about every day; but these records were released primarily in the bilingual hinterland of the european low countries.
This is the CD version from later, so you get a whopping 5 bonus tracks from earlier singles.

DOWNLOAD some Flesh HERE!
Posted by Jonny Zchivago at 21:46

Thanks for the share - just discovered this LP and the link to The Rentals.