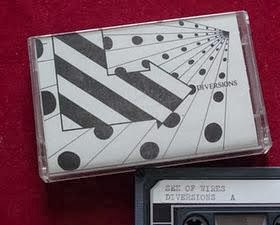 What a timeless electronic duvet this second Sea Of Wires cassette is!
Full of classic warm synth settings,not unlike a solid state volcanic mud pool, pumping out bubbles of sweet sounding ear gases through the smooth hot mud.
This stuff has been tossed aside by an unappreciative public, who preferred their electronica to be made by acne scarred artisans ,like Depeche Mode, with their vests, spiky hair and leather jackets.
Admittedly lacking a pop hook here and there, it is time that The Sea Of Wires were restored to the premier league of the ignored, and…..er….not ignored???
There’s more to life than a catchy pop lyric sung by an emaciated adolescent with questionable sexuality, and even more questionable fashion sense!
You can get the second tape by The Sea Of Wires, “Individually Screened” by clicking Here.

DOWNLOAD this re-re-re-upped Diversion HERE!
Posted by Jonny Zchivago at 09:26

Is there a slight chance for a re-upp of this? the host is dead...

hi yes,theres a very good chance of a reup,soon. I have about 100 to do,but i'll get this up asap;)

Hey JZ, happy seasons greetings! Just to let you know, that nice Yasswaddah chappie posted a FLAC rip of the VoD Sea Of Wires/Chris Jones release, though for some reason, the compilation doesn't seem to replicate the complete recordings that you have posted (must be a space issue as it is limited to two LPs)so your rips are absolutely essential for the full listening experience.

Incredible music, their original releases completely passed me (me and the other 99.9% of late seventies/early eighties DIY aficionados) - so much of it sounds curiously of the moment and not something recorded all those years ago (even when they get dangerously close to mid/late-70s kosmiche territory it doesn't have that 'clean' synthetic sound of TD/Klaus Schultze).

Speaking of good VoD releases, The Sperm compilation is well worth checking out (also posted at Yasswaddah) and according to their website, they are going to be re-releasing the two Those Little Alien cassettes which I am really looking forward to as someone duplicated me a copy of one of them way back when and while I can't remember if it was the Incident In Moderan or Variable release, I do remember playing it a lot (though like some 70s TV, the memory of it and the actuality can sometimes be at variance - though other times it can be just as good like The Changes or Children Of The Stones!).

Actually, I just realised you posted a Gordon Hope from Those Little Aliens track on the compilation 'Frostbite Footwarmers' which I'm just getting now - should have known you would have something from them!

Speaking of interesting releases in general, there is a good recent post-punk compilation put together by the Optimo label, entitled
"(Cease & Desist) DIY! Cult Classics from the Post-Punk Era 1978-82" (yep, slightly naff title) but has some great tracks on it, some not so unexpected like Violence Grows which has always been in my top ten) and some real gems like The Cro-Tones 'Tea Machine Dub' (though I wish they had included the a-side from the single, the JCC inspired ditty by Cathy Le Creme 'I Married A Cult Figure From Salford'

Good FLAC copy of said compilation can be found here or here:

Got a dodgy BT wifi connection at the moment, that only seems to work for emails, so I'm restricted at the moment to checking your blog when I'm around at friends - hoping to rectify all that in the new year as I do miss my regular visits - hope your recovery is going well still, cheers, mate!

Hi the Saucer People Person, seasons greetings reciprocated.
Yes, VOD do have a habit of mashing up the original releases into bizarre orders. Its his power trip i suppose.
Sea Of Wires hold a special place in my 1980's diy adventures,as i wasn't too familiar with things kosmiche in 1980,and thought this stuff was the progressive electronics of the near future.
Children of the Stones indeed.A fine piece of work.
I understand that Cherry Red is putting together a four disc comp of diy electronica from 79-84, 5XOD is on it at least.
I'm toying with doing an electronic comp for my xmas post....its just so hard to choose 30 tunes innit?
Finally found my Another View tape...rather excellent.
Looking forward to Those Little Aliens tapes.....never heard them.
Violence Grows.....bought that off of my ,now dead, school chum tommo for 25p after he turned Northern Soul(?).Got some good stuff off him so he could spend the takings on shhite like 'Butch Baker' and Gloria Jones....shudder!