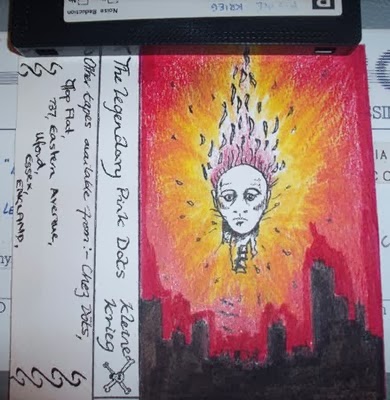 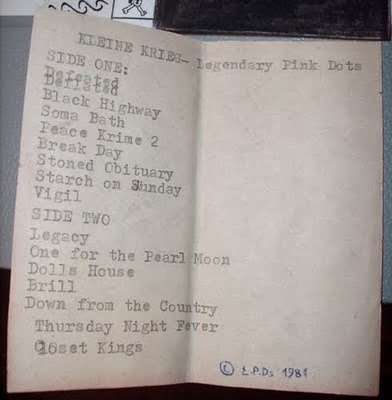 This is the original Mirrordot release. Limited edition of 120 copies.
With hand-decorated and hand-written labels on cassette.
You don't get any more DIY than this, very homemade underground synth-pop. A cross between John Shuttleworth and Syd Barrett, not really my cup of tea, but they command a voracious cult following.
They always got lumped on various Industrial compilations in the eighties, can't see the connection myself,always one to skip over in my opinion,closer to the Pet Shop Boys than TG. Although one could never take time to study the lyrics, they sound irritatingly 'Clever,Clever', in the mode of Morrissey and that bloke in the awful Beautiful South.
But,one must respect their stickability,and adherence to their ideals.
Due to a lukewarm reception in the UK they decamped to live in the Netherlands,where they received a positive response; that's continental Europe for you.

A1 Defeated
A2 Deflated
A3 Black Highway
A4 Some Bath
A5 Peace Krime 2
A6 Brek Day
A7 The Palace Of Love
A8 Stoned Obituary
A9 Starch On Sunday
A10 Vigie
B1 Legacy
B2 One For The Peare Moon
B3 Dolls House
B4 Brill
B5 Down From The Country
B6 Thursday Night Fever
B7 Die With Your Eyes On
DOWNLOAD Kleine Krieg HERE!
or
DOWNLOAD krieg kliene HERE!
Posted by Jonny Zchivago at 12:05

I would say that aside from having a lot of personal ties to the scene—insert David Tibet jokes here—the connection that the Dots have with industrial music lies mainly in their tape collage stuff (especially the really long spooky instrumentals like "The People Tree") and their odd fondness for choppy, aggressive drum machine beats. Their compilation stuff does tend to reflect this better than their early "album" work, though it is curious sometimes.

The Dots identify themselves first and foremost as "experimental" and "psychedelic" and they are indeed both of those things. Their association with numerous goth and industrial record labels is responsible for why they get lumped into those scenes, though their subject matter does tend to be very dark (though whimsical and often humorous at the same time) and their music predominantly electronic.

T was just gonna type 'Oh!'.....but on reflection these are valuable insights into why we had to suffer a 'Dots' track on our industrial compilations.
Thanks.

For anyone who's interested, a FLAC version of this release can be had here: http://nostalgie-de-la-boue.blogspot.com/2015/07/the-legendary-pink-dots-kleine-krieg.html