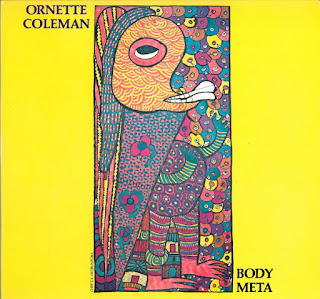 As we were briefly on the subject of Ornette Coleman in the last post,I may as well cheer myself up,and seem intelligent at the same time by posting my favourite Ornette albums,and they were all done in the 1970's,like most of Miles's were. Before at least 1969 it was too bloody jazzy for me.
By 1977/8 Coleman had realized that free jazz was far more effective if one had a semblance of  what appeared to be an accessible time signature,and a rhythm section that hung around something  us normal humans can grasp hold of and go along for the ride.
This could have been a No-Wave group from lower Manhattan,but no, its Ornette Coleman and buddies showing that they had invented No-wave years earlier but decided to do something better.
The guitarist on here, Bern Nix, appears on many James Chance records,and with many others in that trendy Manhattan clique.
But...Having been in a slump,nay, a Beirut Slump.....note clever No-Wave  reference there...as in, Emotional Slump, of late,I have indulged in the time-honored practice of listening to miserable music,Nick Drake, Sandy Denny etc...you know where i'm coming from?..All this to the point of an unhealthy obsession....by the way always veer towards the Demo versions from these artists,but definitely dangerous to your health.
To get myself out of this slump, I put this album on at huge volume,and one detected sheer unadulterated 'JOY',from both myself and the musicians. Even better when i glanced at the sleeve notes,and noticed that this stuff wasn't just totally improvised....they had charts ffs!This stuff was composed!? Which can only enhance the connection for me. Although I did notice that Ornette is dead, like Drake and Sandy,who died in the year this was released....whoops I'm slipping back into my existential crisis again.....the answer....MORE Coleman, less Guinness!?
Tracklist:

Hullo, this is really off the Ornette topic but I don't suppose you could post Folk Scene by The Tower Recordings? Great blog by the way, I'm really loving the stuff here - all the best!

Dancing in Your Head next would be SWEET!

It's an amazing post designed for all the web visitors;
they will obtain advantage from it I am sure.

All roads lead eventually to Ornette don't they? And isn't a cover of Lonely Woman a requirement regardless of genre? I'm a bit surprised by the selection, most people like this one, There are much less popular options, the trio w/ his then 12y.o. son on drums (for some reason, that REALLY piss off a lot of people), his classical pieces, his fiddle scrapping, etc. Still, grateful for what's on the plate. If you failed, yet again to accomplish suicide by drink, thanks yet again. Now, let's see if I can finally get it right...

yep, Dancing in my head next,10 points.

The elites don't want you to know this but the ducks at the park are free. You can take them home. I have 458 Ducks.

I am thee Elite muther fucker!

I wish I was a cat. No School, No Works Just Meow Meow

Oh noes! A Tower Recordings request. Ones of dem fellers hates me with a passion (seemingly) and I could never really figure why. He once flipped his shit over one of his bandmates having to share accomodation in Aarhus with a lowlife like me. I might have felt badly had I actually respected the guy.

Fear not Parmalee... I've no fucking clue who Tower Recordings are, or aren't!......but if any fucker hates you they don't get on dis blog .man!

I'm quite open to stupid guys playing stupid shit...even stoopid guys playing clever shit....so we're on to something profound her i think....Jimmy Pursey was good at stuff like this.

Truth be told, the Tower Recordings were actually pretty damn good--early aught's psych-freak-folk shit (neu Comus, ISB, etc)--despite their moneyed backgrounds. (Remote possibility I'm wrong on that, but I knows the whiff of affluence well.) If I had to guess why (I think) the one guy hates me, I think it came down to my dog simply being way cooler than his, and this being painfully obvious to virtually everyone--a band of Finns even wrote an epic ditty for him. Instrumental, of course, cuz words could only diminish his greatness.
I've never met a dog I disliked, but this dog had a serious attitude problem.