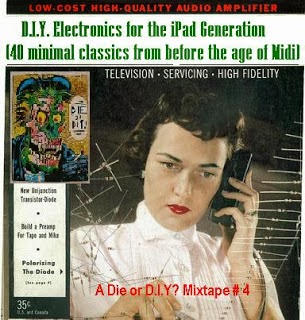 It is generally accepted that Rock, in its broadest term, finally died in 1984. The main culprits in this tragic demise have always been accepted as Capitalism, consumer brainwashing, and freely available easy to use technology. The almost criminal acceptance of MIDI as the tool for musical communication killed almost all relevant and exciting music stone dead overnight. Gone were the slightly mistimed notes that made music human, made by humans for humans. In came music made by machines for corporations’ banks, and therefore for the New World Order. This reached its zenith with the advent of post-acid, house music; which along with stuff like the neutron bomb, LSD as a mind control tool, assassinating dissenting public figures,- had its origins in a secret room in the Pentagon. Music, and I hesitate to call it music(program, or Pogrom, is more descriptive), for the Illuminatti, MK Ultra for the unwashed masses. This is the stuff that turned us all into the consumer monkeys that we are today; and the worst thing is that its STILL here, after 25 fucking years!
Lets go back to the BC (before good computers) of electronic music. When the only way instruments could talk to each other was with a rather unpredictable thing called “Controlled Voltage/gate” (CV/gate), or, by that even more unpredictable device called playing an instrument by hand!!!?? How primitive, or rather how good was that? We are now becoming in reality, a fleshed out version of that brit-flick non-classic “Morons From OuterSpace”. Technology has become so miniaturised and complex that we only know how to operate it, but are clueless as to how it works. There was never this problem with the original synthesisers, if a component failed it was merely a case of replacing a defective part, or more often a swift bang with the hammer and it functioned once more. Like 21st century cars, you can’t fix 21stcentury synthesisers yourself, you gotta pay the man, or buy a new one. That, and built –in-obsolescence, ensures the consumer treadmill of global doom keeps turning until we all starve to death.

Possible my favourite rant of all.

Bravo. Keep on kicking against the pricks. Long live DorD2.

Cheers Bill, I must say I enjoyed reading it myself.

Thanks, but its Too high brow for me.

Also, that Andrew Mackenzie bloke is far too precious with his work to allow me to host it here. Only Beyond the Implode, and Crawling chaos twats are worse. So beware, he'll be after you.

Hey, nice one Petty V!
I'm back!
Didn't realise you lived in Seattle,like my yank pal Ken.He's weird,but he lives in France now ,which is how I know him.

Try it again,seems fine to me....sometimes it takes a few goes to get mediafire to ignore their amazon/iTunes alliance.
I'll re-up to google later though.

It works now. Thank you.

This post is wonderful! This Blog is wonderful! Jonny, your (counter)culture, your material, your posts, your reviews is what I needed! Cheers!

many thanks anon xx

Track 6 in part 1 is corrupt. Can you take a look and repair / replace it?

Is it Gorrila Aktiv?....you can get that elsewhere on this blog.Just search for Gorilla Aktiv.

NM, it was my connection. I d/l'ed again and track 6 is fine.