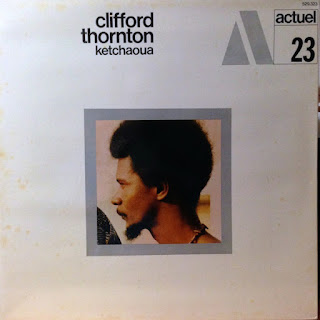 "Music has no colour",said the French Jazzer...I'm certain Archie Shepp would disagree,as he plays Soprano for his buddy Cliff Thornton on this afro-centric polyptych of free jazz. Both he and Thornton were trying their level best to remove as much whiteness as possible from this french released miesterwerk. Africans may not have invented the wheel, as some enlightened bigot pointed out alongside our advocate of 'colourless music'in the comments section, but they certainly gave us honkies virtually all our modern musical forms.For which they are rarely acknowledged,but after-all it belongs to all of us innit.....sorry Archie?
Shepp's presence gives this platter a distinctive Archie Shepp flavour with his instantly recognisable style,augmented by Thronton's very capable horn blowing.
Would you believe it?...there's Béb Guérin once again on the Bass, and this time the photo of him reveals the distinctive look of Gregory Peck as Captain Ahab in "Moby Dick", as the White Whale In the Room.
Tracklist:

Hello !
Good record !
I'm quoted ! ��
I assume : music has no "ethnic" colour. And "races" don't even exist, so far..
Archie Shepp : a good fellow.. but he's better on sax than philosophy. And he's kind of reactionnary guy when he supports neo-liberal political guys in France (Yes : he did that !).
Octobre révolution in 1964 : there were also Paul and Carla Bley, Alan Silva, Burton Greene... only black guys ?
Black people didn't invent the wheel, yes, but they might have invent it. So what ? Also, white ones can play free jazz with equal strength and soul than their black friends.
Thanks again for this post.
Gorgeous record of Arthur Jones with... Beb Guerin ��: "Scorpio", on America label.

Hello !
Good record !
I'm quoted ! 😆
I assume : music has no "ethnic" colour. And "races" don't even exist, so far..
Archie Shepp : a good fellow.. but he's better on sax than philosophy. And he's kind of reactionnary guy when he supports neo-liberal political guys in France (Yes : he did that !).
Octobre révolution in 1964 : there were also Paul and Carla Bley, Alan Silva, Burton Greene... only black guys ?
Black people didn't invent the wheel, yes, but they might have invent it. So what ? Also, white ones can play free jazz with equal strength and soul than their black friends.
Thanks again for this post.
Gorgeous record of Arthur Jones with... Beb Guerin 😄: "Scorpio", on America label.

P.s. sorry for my pour english... and possible mistakes : I write on a phone, and I'm not Eagle-Eye 😎!

Niggers have contributed fuck all in the history of the world. FUCK ALL.

Darkies never invented the wheel, or anything else, they would never invent the wheel if we left them for another million years. Most African races don't even have a frontal lobe to their brains - the frontal lobe is how the civilised races reason with.
No PC fascist is gonna call me a bigot for not following their PC lie that all-races-are-the same bullshit. They're not, and never will be, that's why we ran half the world, not sat all day in the sun letting the women do all the work like they did and still do in Africa.

This was where I came in. A classic, to me anyway. Reminds of hot summers in front of the fan. One further album w/ the JCOA and he disappeared into academia, much like Byg-mate Jacques Coursil. Unlike JC, as far as I know Cliff didn't reappear to release any more music except showing up as a sideman now and then. A damn shame too. He was evolving into a hellava composer/arranger. Yeah, Speak With Your Echo (And Call This Dialogue)…BITCH.

No Frontal Lobe LOL? Rather like some of our charming commentators above. Makes yer proud to be white doesn't it?....(was being ironic there by the way.....certainly not proud to be anything,except proud that I'm not the nameless bigot above....especially amused at being called a pc fascist by a fascist....wot a twat.

Waouh ! What music (or something else ?) let someone think !...
Black didn't invent the wheel, or electric guitar !... but white didn't invent algorithms and kora... but black didn't invent Mozart or mozarella !... but white didn't invent J.Brown and borwnies !... but black... but white ... but black ... bwhite ... bblll...bbwww...
The list has no end ! But who cares ?!
We're all blithe and whack ! And everyone may try to do what he wants to do, because d.i.y. or dye, isn'it ?
It's good, indeed, to hear some of us who do or did something in a soulful way, as Clifford,of course... but also Archie : I don't want to be unfair with him, because I like many of his stuff, like "Fire music", "Malcolm", "Blasé" (his masterpiece), "4 for Trane"... But what a pity he falls into gospel-blues-spiritual academism since the 80's !
Thanks to Rev.b to recall Jacques Coursil, who did beautiful sounds on Byg, America, and Tzadik more recently.

Never mind anon. Funny how white ‘supremacists’ thwart their own argument every time the speak, act out, etc.. You don't have to approve this sort of thing you know. I s'poze it makes for good verbal target practice.

Yeah Rev, i gotta get this prejudice stuff out on the web or i'll be accused of no-platforming the cunts.Hell, i'm prejudiced myself,like we all are. I'm prejudiced against white supremacists ,does that make me a bad person....probably,but they need to be exposed and shouted down.Its a bit like banning records, they become number one in the charts don't they?

Spot on Jon, white supremacist shaming is a sporting pursuit. my version of white pride I rekkin'. It'll do until public stockades come back into fashion anyway.