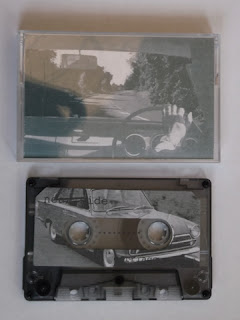 To round up this brief spurt of Snatch tape related posts, here is the Final release on said label. A trademark collage of found sounds,dialogue, and electronics that could have been made any time since 1979 to the distant future.

" Gobsmackingly great surrealist clusterfuckery refashioned from vivisected fragments sourced from the entirety of the Snatch tapes archive. Swarming subterranean electronic malevolence bleeds into antiquated Hauntological ghostings that are then sheared at right angles by a Cupol-like and hermetically bleak species of minimal synthiness. An apex of queasy delirium for your predilection." (Mutant sounds)

"To mark the 30th anniversary of the release of first Snatch Tape in 1979 we are pleased to announce the issuing of a final DIY cassette. Entitled Carriage Return the work consists of two twenty minute sound collages assembled from the thirty years of accumulated reel-to-reel tapes, cassettes, mini disks, CDRs in the Snatch Tapes archive.

Snatch Tapes is well know for its pioneering DIY approach and this final tape is a true Do It Yourself release in that listeners are supplied with all the files needed to make up their own cassette. Provided are two 20 minute MP3 files (one for each side of the tape) and full sleeve and label artwork ready to print off at home. All you need is a cassette deck, a blank C46 tape and a pair of scissors (or scalpel for a cleaner cut).
Listeners may of course use the mp3 files on their iPods on the understanding that after a thirty-day trial period they should either transfer the files to cassette or erase them."


"The sound of Snatch tapes in general was, for me, the typical sound of the DIY generation circa 1980.Much twiddling with improvised equipment, overdubbing cassette to cassette, and formless electronics. This was a world where verses were forgotten,and chorus was a misplace word; – what does it mean anyway? Singing, you can forget about that and make do with some self-conscious mumbling, ‘cus this is music owned by the people. Songs and singing were for the old order, this was something new? These were people like us!"

Its all best said in the words of the great man himself, the modest and self-effacing Hero of DIY, Mr Sanderson:

I'm kinda new in this blog and I love every post here even the ones I already have. Anyway, there seems to be a problem here: the link you provide is for a warf99 track from year zero records, wich seems to have disappeared. Thanks for your work.

Hi, The Wharf 99 link will be fixed,its on Year zero records,which is undergoing maintenance.It will return soon.
Cheers.

I Couldn't have put it better myself.