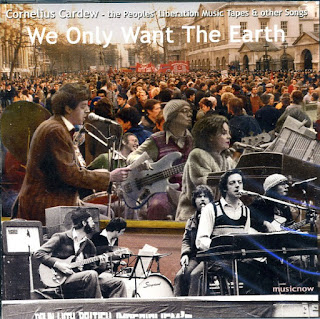 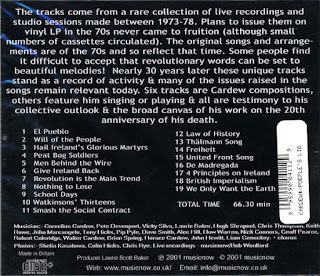 As UK avant-garde legend ,Cornelius Cardew, actually came up with the idea of democratising music with his 'Scratch Orchestra Constutution',he should be credited as the inspiration behind The Portsmouth Sinfonia.He had already put this into action with his Scratch Orchestra performances,a couple of years before his chum Gavin Bryars nicked the idea. So it makes complete sense that Cardew would invade the world of Rock music just before the Sinfonia made their own Classic Rock covers album.
For Cardew, it was a result of his very hard left Political views that caused him to reject the Avant garde as elitest and embrace the far more inclusive world of Rock and Pop. No matter how out of place he looked.
So he started the 'Peoples Liberation Music' project,which was more or less a collective rather than a band.Anyone could play in it if they had half an idea how to make a musical note. It also provided a stage for his tiresome Political ideas,which were ruthlessly rammed down the listeners throat.
There's a reason why Classical Musicians,or communists, shouldn't be let anywhere near a Rock group,and this is a fine example.Another one was that truly awful Classical/Rock fusion group from the eighties 'Sky',which makes this stuff sound like The Sex Pistols.
The dreadfully anemic tunes seem to be there as an afterthought, to play behind those cringe-laden lyrics.Plenty of shite like "Will Of The People"....where have we heard that before?....Hitler,Brexit,Trump.....not a marxist among them. There also seems to be an inexplicable obsession with Ireland too.
It sounds not unlike one of those Christian Rock ensembles that released bucket loads of terrible records in the 60's and 70's. I suppose Communism isn't that far from being a religion,so the likeness is inescapable.
However,I have to say that, I find this album a weirdly charming, and very, very funny experience.I can't stop playing it!?
Some of the Irish tunes have a folky edge that may have influenced professional Irish Cockney and drunk, Shane MacGowen(Who,incidently was indeed a public schoolboy at Westminster school,and is therefore also Posh!). However, Cardew's singing voice has a clearer intonation than MacGowens spittle soaked expectorations,which figures, because he's so obviously very Posh.Of course he was,with a name like Cornelius Cardew for fucks sake!
In my decades living on a council estate in the midlands,I didn't meet one single Cornelious, luckily for him he didn't exist, or he would have got a daily kicking.The real working class that Cardew was so keen to liberate.....he obviously never met any.
I was daily under threat of violence after I qualified for Grammer School. No longer was i called by my given name. It was now the affectionately charming 'Posh Cunt!'. "Here's that Posh Cunt! Who does he think he is?...Fooking Posh Cooooont!" (Punch Kick Hurt)
They obviously didn't want anybody to be liberated,if it wasn't themselves.The underclass conspire to keep each other down, nevermind the fucking Bosses!?
This album is the sound of bourgeois guilt,and the cluelessness of what working class people actually want.Trump and Brexit is their kind of language......fuck 'em.
Cardew fans think that singing about Smashing the Social Contract,Irish Peat Bogs, and Imperialism was enough for MI5 to do Cardew in.So when he got run over after walking in the middle of the road after Midnight in 1981,he was obviously assasinated and absolutley NOT a victim of a 'Hit and Run' driver.
As with any famous person's death in the realm of the conspiracy theory,they are nearly always murdered and never die of natural causes or accidents.
In this case it was almost certainly an accident.....but at least it stopped Cardew from making this god-awful rock music ever again!

Meanwhile a tatooed mother clad in knocked off sports gear, shouts through her facial piercings into the street,to inform her son that dinner is served....."Cornelius, get in 'ere, yer fooking chicken nugget's are in the bastard microwave !!!"

DOWNLOAD your very own revolution HERE!
Posted by Jonny Zchivago at 00:49

Excellent commentary. I sometimes play this one just for laughs--at least the Cow's "Living in the Heart of the Beast" kinda rocks. A little. Did he honestly not see just how condescending this is? And just plain bad? Like the proles'll never truly understand their plight without the aid of some idiotic jaunty tune underneath.

Also, this is priceless: "However,I have to say that, I find this album a weirdly charming, and very, very funny experience.I can't stop playing it!?"

I can't tell you how many times I've put this song from the other PLM album on repeat:

I've never hit anyone in my life (always on the receiving end), but I'd totally punch this guy. And why did they record it in a public toilet?

@parmalee -Fucking hilarious...song for the "british working class"...coming up next in very high quality,no toilets in sight.
I wouldn't mind doing a deadpan cover version of this.....the subtle art of Irony, an art that bypassed Cardew compleatly!
You mentioned Cows?...careful prolific comment maker Kev-b is a leading ex-Cow.

Pip Pyle plays drums on some of these PLM tracks--how weird is that? And there's a former Cow here? I'll have to refrain from mentioning the time Chris Cutler told me that Art Bears' "In Two Minds" was based on an RD Laing book WITHOUT mentioning the even more direct "borrow"--namely, Ken Loach's film, "In Two Minds."

"because he's so obviously very Posh.Of course he was,with a name like Cornelius Cardew for fucks sake!" Yes. That's it. Lurking at the heart of it all.
Even his instrumental music supposedly communist themed is borrrring.

I thought he died on a bicycle, like the communist woman from Stereolab. Leftists are often dying on bikes.

@parmalee...yeah,you had better say their full moniker, Henry Cow when you're slagging them, cause the 'Cow' who comments is from the american noise rockers 'Cows'..he might get confused,and we don't want that.
Isn't Chris Cutler rather handy with the litigation and copyright trigger finger?...he's watching y'know....a fine communist.
Reading those comments on the YouTube link almost made me vomit!Like the guys jesus or something...Humans!?

Any other 'rock' bicycle deaths?.....i thought he was walking,in the middle of the road to avoid the icy pavements,could easily have been cycling i guess....one things for sure, the MI5 weren't drivingthe car...if anything they would have wanted him alive to further turn communism into a laughing stock with his rock group. The hump back bridge probably hid him from view for the driver of the naughty car wot done it guv'ner?

Christ I'm so confused its of course Kevinesse not Kev aka Rev-B.....I'll force myself to listen to The Peoples Liberation Music again as punishment.

Any other 'rock' bicycle deaths? Nico had a cycling death in 88, probably on smack as well.

@ Kevin--You've gotta come back, at the very least, so you can hear "Song for the British Working Class."

@ Jonny--Those sorts of comments are all over Cardew's stuff on YouTube. I don't get it, at all--it's almost cult-like. When I was a kid, I had unrestricted access to tv. The Jesus channel was always showing this weird rapture movie, that was more like a cheap apocalyptic horror film. But it opened with this song, which is, weirdly, really good:

Oh Yeah I forgot about Nico....the jury's out as to whether she had the heart attack before or after falling off her bike.
She lived at John Cooper Clarkes place...i remember Clarke recounting how this happened...saw a mate in manchester who said" Ay Mate,you'll never guess who's staying at my gaff?....only fucking Nico mate!
And shes lookin for somewhere permanant...etc.... a smackheads wet dream.

@ parmalee OMG war is hell....the fishmarket combo was their name. Without them i'd be joining the New ISIS. I'm suitably gobsmacked.
COME BACK KEVIN!!!!!

I find myself enjoying this stuff the same way that I enjoy Gospel music. I'm not buying what they're selling, but there is musical value coupled with an alien viewpoint. What's not to enjoy?

I honestly think Lindsay Cooper is a genius though I can't be bothered with the lyrics most of the time. Chris Cutler once said, "We work with the system we have, not the one we dream of." So I'll forgive him for not freely distributing his music to the masses without a thought of recompense.

This stuff comes off differently in The States as you might imagine. The turgid nomenclature of young Marxists is rare here now. It serves the purpose of all nomenclature everywhere: To Exclude.

The simple matter why Communism doesn't resonate much in The States? All that talk of work and workers. We work our whole lives here and don't get much for it. Most of the glorious benefits of "Democracy" vanish the moment you're on the clock. Fuck "Jobs" and the supposed "work" we do at them. Seizing the means of production sounds like even more work. To hell with it.

Thanks for your enjoyably cranky efforts here with the music blog!