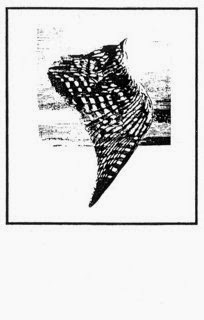 Scraping ambient noises, with abundant repetitious tin can percussion, adequately describes what you are hearing on this cassette release on David jackmans Aeroplane label. Following his contributions for Sanderson’s Snatch Tapes compilations; it seemed only right that he should collaborate with Sanderson and release it on his own imprint.
For some reason, ‘Under Press of Sail’ makes its third appearance,albiet a more ambient version, (see Snatch 1 and Snatch 3), and ‘Ashes and Diamonds’ makes another too. I suppose its easier than making a new track, and you may not have heard its other manifestations,so why not?
The title track,’Zero degrees north, sounds rather unimaginatively like the north pole,lots of windy synth effects.Pretty uninspiring, but there’s plenty else to be inspired by on this C30.