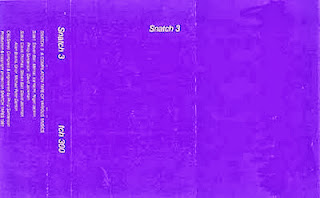 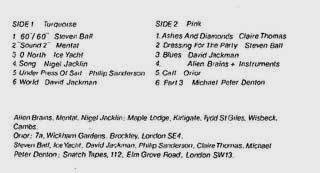 More avant garde sound sculptures from Phillip Sanderson’s Snatch Tapes. The man himself appears a few times on this tape, including another version of ‘Under Press of Sail’, and as Claire Thomas, and probably Ice Yacht too; and why not,it is his label after all?
Avant Garde legend David Jackman contributes two drone-fests,as befits a man of his stature in this field.
The Alien Brains get funky??,Orior get Ambient, Steven Ball turns from experimental to library party music in one fell swoop;M.P.Denton is in bedroom contemporary composition mode, and Nigel Jackson gives us a tape collage buried under a mountain of cotton wool.
This just leaves Mental to perform a Sax,tape, and sequencer improvisation in someone’s toilet block…….and rather fine it is too.
Various artists/various musics is the key word on a Snatch Tapes compilation, which is as it should be one supposes.
Listen to the two hour radio special podcast, by Collective Voice Radio, on Snatch Tapes HERE!…it includes many extremely rare Snatch Tapes releases,and an interview with Mr. Sanderson himself. Its a recommended listen.
Track Listing:

kindest regards for the thousandth goldmine you've provided me!