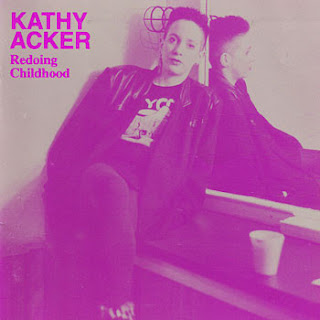 A posthumous release of that potty mouthed punk poetess',the late Kathy Ackers' "Redoing Childhood".
I do sense that everytime she says the word "Cunt" there's a tiny inkling of discomfort in her voice,like she's doing something naughty and her parents might be listening.She does,however use the word as a Noun rather than an adjective,or a verb.Reclaiming this female body part as just that rather than an insult.
Of course, using sweary words and being naughty was what everyone thought 'Punk' culture was all about.The more expletives one used the more ...er...Punk(?)... you were.Punk as invented by The Daily Mirror that is.
Certainly, there's far more depth to Kathy Acker's use of these words than some silly twat with a Mohawk shouting "Punks Not Fucking Dead Yoo Cunts"; but as these cuss words are unecessarily inserted in every form of media, they have lost their negligable effect, and become sanitized.The ability for words to shock in such a way has ended. The real shocking stuff comes from the normal language the modern human uses to explain away why they don't want refugees living next door,why women who wear make-up are 'asking for it' or why Climate Change is a hoax. Its the mundane words that have inherited the shock value,'The Banality Of Evil' as it were. 'Fuck' and 'Cunt' are now words that should be used exclusively to descibe these people who have ,supposedly,lost their faith in politicians (ahhhhh?)believe conspiracy theories but disbelieve the media. A stance taken by former 'king of the punks' and contemporaneous potty mouth alongside Kathy Acker, Johnny 'Trump fan' Rotten..The difference being, Ackers intelligence is obviously more than a tool to ease ones self-esteem problem.
I thought thats what I wanted too  growing up during the Punk Rock era, but the real effect of this self-dumbing culture of the 21st century is a self imposed dictatorship,in which consorship is almost complete in a flood of redefined Truths. As Michael Gove said,"the Public have had enough of Experts"......so that leaves non-experts, i suppose, to run our destiny?....hmmmm, comforting.
So what better reminder of those good old shocking days,when calling someone a 'Fucking Rotter' on national TV made world headlines ;on the only day that ladies are allowed to ask a man to marry them,(the 29th of feb,if you were lucky enough to not know?),than the unromantic,fucked up and violent, post-modern world of Kathy Acker to remind you that we're well and truly Fucked you bunch of Fucking Cunts.

1 President Bush
2 Miss Savage's School For Girls
3 The Temple Of Eros
4 A Country That I've Never Seen
5 I Will Stay With You Tonight
6 Hotel Etoile Rouge
7 Outside The Law, Which Is Language
8 The Female Doctor
9 Hotel Of Lilac Eyes
10 Face To Face With Death

Come for the (sometimes) music, stay for the incendiary commentary. Thank you as always for the read. Gorgeous.

You're very welcome....for me its mostly about the commentary,so i'm glad you think its incendiary and above all, gorgeous. Cheers.

Kill Rock Stars is a goog place to begin. Rotten's pretty high on my list...

All of these f---ing c---s can f--k off!
I suppose Kim and Thurston still think itz cool, man.
Not being a "poo-head" to you though, this is the best thing on t' 'net!
Anders Lagerstrom

Funny you should mention Thurston Moore....as much as he gets a slagging on these pages, he will be appearing again in one of his endless collaborations...this time with Anne Waldman and Clark Coolidge...two dial-a-poem types.....its actually rather good.

@Rev.b ...yeah...i never recovered from the let down and betrayal that i felt when it was revealed that Rotten was a liar, took drugs, was married and had sex!!?? ....but i would still turn into a giggling fool if i ever met him or William Shatner. Like screaming girls at a beatles concert, there is no logic to this reaction.
Lydons defence is that he was part of PiL's first issue album...i'm crying just thinking of its sheer majesty. Therefore he escapes execution come the revolution.

'ello John,
Me and my mates rolled up to see Sonic-Youth in early 1989, we were all under 20, and we met them after the show. They were really nice to us young blokes (no girls with us...) and I asked them whether they liked 'Lubricated Goat' (one of the handful of good Australian rock bands) and the Thurst replied, "they supported us in Melbourne." We were all impressed and none of them were remotely drunk or stoned.
Kim Gordon rocked up on stage wearing these big platform boots, my brother yelled out "Gene The Demon" and she laughed her head off.
I'm with you about Lydon/Rotten. When I found out he got married in the late 70's etc, I was disgusted. I actually thought it was bullshit! Funny thing is, I still love Rotten!
Anders Lagerstrom

Looking forward to the Thurston Moore one, he's a great musician and especially in collaboration. It's just as a lyricist he always annoyed the shit out of me: I HAVE READ SOME BEAT WRITERS! BEHOLD MY GRATUITOUS PROFANITIES!

Also an arsehole by at least Kim Gordon's estimation, but nobody's perfect, least of all rock stars. More lightheartedly, I remember my first SY gig where he tried to stem an influx of stage invaders by telling them "there's one rule... you must be naked ". Cue all the security team visibly groaning.

@Fosters Lagerstrom whats "Gene The Demon"...not that bloke from Kiss issit?..i know they were massive in the antipodees.
Yeah Rotten is a Twat, but...as i said....he was there when i was a very impressionable 13 year old, and this shit stays with you dunnit?

@ Alan Burns yeah Moore annoys, but maybe there's likely something in him that i recognise in myself,as many a shrink will tell you is the case in those one dislikes. I'm sure i'd get on with him,as we are both record bores who play unconventional guitar.
The record with Coolidge and Waldman is particularly great...up next.