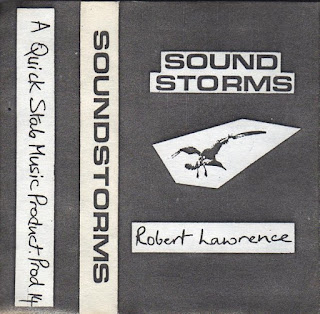 Got a bit bored of blogging leading to a notable lack of posts.....i'm only human allegedly.Tell that to my ex-birds, who think I am an emotional Android......sshhhhh....I am an emotional android and proud of it.One of 'em used to call me Spock; who wasn't an Android by the way, but a highly efficient Vulcan/Human hybrid, often let down by his human side.....I'd like to think that's me, but I'm fucking shit at da maffs innit?!
So here's a popular one to break the silence; the prolific bedroom synthesist Rob Lawrence from the west country south wales area of that sceptered isle which once owned the world,lost the world, then owned the world of modern music and popular culture in general. At least we've got something to be proud of in this cesspit of shame.
On a topical note,Cameron/Putin shouldn't have wasted their money on offshore investments in the Virgin Isles; they should have bought a pile of UK DIY tapes, because these Objects D'Art have risen in value incrementally by nigh on one thousand percentage points since they were virtually given away back in the day. An onshore investment worthy of any working class tax avoider worth his or her salt.
Those familiar with the veritable wine-lake of work by Rob Lawrence will know what to expect. Beaucoup de musique electronique of a Lo-fidelity flavour;lo-budget, but Hi-quality. "Soundstorms" is erring on the experimental Krautrock influenced edge of the sonic pizza, crispy but with under cooked toppings,light on cheese with extra Anchovy's.

A1 Soundstorm One
A2 Telephonemuzak
B1 Beach Head
B2 House Work
B3 Demagnetised
B4 Soundstorm Two
DOWNLOAD a storm of sound HERE!
Posted by Jonny Zchivago at 10:12

This stuff is great. Thanks for sharing.

Time out from a good thing is essential from time to time. Of all the years that I've sauntered my way about the enormous and endlessly evolving world of posts, uploads, news, information, information, information, convenient shopping, obscure objects and electronic tools your contribution, at this end of my experience, brings a new light to the aura. Just want to say thank you for the rich pantheon of handpicked taste and insightful human commentary that you provide. It's all very much appreciated. All the best. :-)

Many thanks Taren, i try.Just happy that I can make a difference in some way.
Cheers.

Thanks! It's amazing how many of these obscure gems you can find.

Sorry you got bored with the whole blogging thing. Don't know what the f*ck I'd do for inspiration without most of the gems you dig up!
I'm a big fan of Jandek as my material is mostly acoustic, so I'll be checking out the rasta dude below. Many thanks. Keep on truckin'.

I am informed that there are actually some people out there who DON'T like Jandek?????......still bored....getting round to editing some more Industrial-ish tapes,and a new compilation to celebrate Leicester City's impending Premier League triumph.....footballs answer to Jandek.

Could you put some stuff up by Tony Conrad? If you have any that is!

Hey there! Saw you've got two posts about the old "livingroom band" that I was in, The Prutsers.... Made me search for old tapes, here's more from us, I'm still searching so there might even be more :) Here's more, hope you'll like it, greetings from Bandung, West-Java...

And why not, who knows, you might like it, when I was playing with the Prutsers I was also making music by myself at home, a drumkit, a 4 track cassette recorder, an old pump organ and like with the Prutsers any kind of instrument lying around..... Later I bought one of the first casio keyboards that had a sampler, no computers yet, you had 1,2 seconds to sample and you had to time it 'cause you couldn't cut those samples, a mic hanging on the speakers :)

Here's a bunch of songs from those days, starting from around '85 till '96, I then left for Indonesia where I still live....

So all this stuff is from old dusty cassettes.....

Indeed Henk, Prutsers Vol 1 and 2 are most popular downloads via sister site Year Zero Records.
I doubt you are aware of Prutsers being played on WMFU radio in the USA,3 times?
Here are the links to stream those shows:

Great stuff,
Will ingest the solo tapes with glee.

Seriously??? Hahahaha, that's so funny :) At the time we were just a bunch of out-of-work stoners freakin' out :) I will try to dig up some more ok, tried contacting Jan but from what I hear he's not doing so well, became a bit of a hermit with a bit of a hint of psychosis (I plan on looking him up next time I'm in Holland). He should still have one more cassette that we did.... Robo is still very active, making movies these days.....

I'm going to listen to those WFMU links (I so miss their blog) after I finish recording a record for my blog, thanks for that!!!

And that's one hell of a blog you have, I'm amazed!

Its a fine radio show, Thomas Storck has played something from most of my recording history...including my old school band 'The Barron Balls'...hilarious.
I could see a day when that bloke from Vinyl-On-Demand puts out a Prutsers box set.
So there's enough material for me to compile a Prutsers Volume 3 then?

I'm sure i've been on your blog(s) before,has one got a lot of strange music from Java on it?
Anyway, I am a Prutsers fan, and your solo stuff is almost its equal. Perfect stuf,that fits in with N.Senada's Theory of Obscurity very nicely.

Firstb time I heard of that theory, but it does make sense :)

And yeah, I mostly post Indonesian stuff but also loads of other stuff. I'm deeply into jaipong music myself, a kind of trance like music that's just amazing.....

I will see if I can find some more Prutsers but I think you've got most of it now ('cept for that lost tape, damned!!!)

I never really stopped making music, with a pc and Fruity Loops, but I miss those days when it was much harder to make it....

Here's one that I'm quiet proud of :)

And this one for sure, made music to one of those I was a junkie and found Jesus records from the 60's....

And this record was featured on the WMFU site once:

Theory of Obscurity.....check out The Residents' "Not Available" for the origin of this theory...supposedly provided by the mysterious N.Senada; It states that a recording shouldn't be released until the artist has forgotten its existence.
I'll see if i can rustle up a Prutsers Volume 3 to post.
Its all good.
JZ

Glad to let you know that I managed to get into contact with Jan, and he's doing fine (a big refief for me). He will send me all the prutsers that I somehow lost so I will be sending yoiu more really soon ok, some real jewels among those tracks....

The Residents once recorded an album in the famous Jugala Studio's here in bandung, I still haven't found out which album.....

And that's a funny theory, most artists won't forget what they have recorded I imagine :)

Good news.I guess you clued him as to the radio shows he was featured on?
I have no idea which Residents record was done in Bandung!....an interesting challenge.
I look forward to more Prutsers, its something that I play often, when i usually just play something once.That means i really like it on a conscious and sub-conscious level.
I have recently discovered some music that i recorded and completely forgot about...so it is possible.