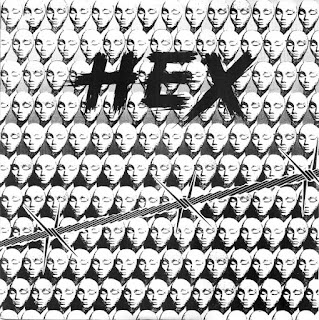 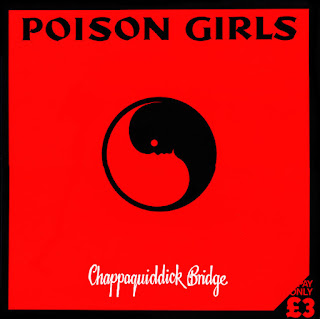 The forty something mother of two of the Fatal Microbes was the lead snarler of The Poison Girls, Vi Subversa. She broke the mould by starting a rock career after the age of 25, in fact she was 40,slightly chubby, saggy round the jowls and a marketing man's nightmare. Its normal nowadays to be pushing forty to be in a group, nobody batts a droopy eyelid. Mothers in bondage can rebel too, and she was the first to do it......it's also known as having a mid-life crisis by the way.
As much as I don't like seeing a bunch of old blokes 'rocking out', one has to admire them for it. I saw a video of the Angelic Upstarts playing all the 'hits'at the 100 club a year or so ago, and they look like a bunch of Arthur Mullards socking it to an audience of Les Dawson's and Hylda Bakers with dyed pink hair and biker jackets(Fuck me! Mensi looks like some kind of lizard with a pot belly and a flat cap!?). Its no different to my mum and dad going to see the James Last Orchestra in the 1970's......yep there's nothing like moving on is there?
I'd love to see/hear James Last doing a 'Punk' medley of 'Anarchy in the UK','White Riot' and 'Ca Plane Pour Moi", wouldn't you?.....far more subversive than the 'real' thing.
The nearest I could find is Herr Last knocking out Hawkwind's classic, 'Silver machine' and Alice Cooper's 'School's Out',sandwiching T-Rex's "Children of the Revolution".....never before have Marc Bolan's poignant words been more relevant,yet, irrelevant at the same time,.....enjoy:)

Vi died last year i am told,still 'rocking' at the age of 80.
She did however, spawn half of the Fatal Microbes, whom she got a single deal for with her influence at Small Wonder; who said there is no nepotism in the Anarcho-Punk scene?.....probably isn't any Anarchy or Punk either, but don't let that put you off....well in fact yes, let it put you off.

Check this charming duet at an Anarcho-Punk free festival, between Vi Subversa and Mensi, 'punking' up "You're the one that I want" from 'Grease'

Oh Yeah!...and what are the Poison Girls' records like?....who gives a fuck really....they're alright i suppose....not as good as James Last driving the final nail in the coffin of Rock with his revolution rock medley.He had an incredible talent for draining every ounce of energy and life out of anything he got his hands on. He inflicts more damage on the Rock'n'Roll myth in five minutes than the Punk movement has managed in 40 years!

"Hex":
A1 Old Tarts Song
A2 Crisis
A3 Ideologically Unsound
A4 Bremen Song
B1 Political Love
B2 Jump Mama Jump
B3 Under The Doctor
B4 Reality Attack


"Chappaquiddick Bridge":
A1 Another Hero
A2 Hole In The Wall (Thisbe's Song)
A3 Underbitch
A4 Alienation
B1 Pretty Polly
B2 Good Time (I Didn't Know Sartre Played Piano)
B3 Other
B4 Daughters And Sons

I looks as if you posted the PG's as an excuse to vindicate that lady Hylda Baker (never heard about her until now, thanks!) and James Last's r'n'r destruction machine. No problem with that but yes, I'd say Poison Girls' records are alright! Maybe the lyrics are too invasive for one who has English as mother language. Luckily it's not my case and I can ignore the words totally and enjoy Vi & Richard Famous' interesting, sometimes fascinating music. The lyrics may be interesting depending on my moods of the day. Something very similar when I listen to Crass' Penis Envy, excellent music, and then... the lyrics, well, ditto. For instance, I had always problems with "Where next Columbus?" They forgot to add one line about "Crass had an idea etc" and the rest, and to apply themselves the whosyourleaderwhichisyourflock lines. The song is great though.

I wonder if you added the 'statement' flexi of Chappaquiddick, can't wait to open the pack ;)

Ah, the Bloody Revolutions/Persons Unknown single - what a childhood imprint that was - I remember coming back from the local record shop on the bus and unfolding the gatefold cover as if it were an alien object - everything about it was infused with Otherness and I only have to hear the opening bars of either track for the memories to flood back.

I had no idea Vi died last year and have only just discovered the Poison Girls drummer Gary Robins passed away in January - I have fond memories of interviewing them at Sheffield University as a young teenager on their Big Brother/1984 tour (the then Socialist Republic of South Yorkshire funded a yoof 'video' magazine and I managed to blag a filmed interview with the band and I remember us all pissing ourselves as the director got us to earnestly nod our heads at the end for cut in shots. No doubt I was a little star struck and no doubt asked some stupid questions, but I do remember their kindness and willingness to engage.

Live, they were a great band and it is worth reading Vi and Gary's tribute on their website by fellow band member Richard Famous to realise just what long and incredible lives they led.

For anyone who doesn't know, you can download pretty much their entire discography on poisongirls.co.uk and in keeping with their anarchist principles and no doubt relative poverty, you can download for free with a suggested donation (say what you like, how many bands would do That?)

I would also recommend the scans from the four editions of the Impossible Dream magazine on their site - my hard copies are long gone but it was an incredible work, up their with the later editions of the Tom Vague zine.

A truly great band with a good sense of humor - I think Vi would be smirking at your Hilda Baker reference if she were still here.

PS> thanks so much for the James Last video, I used to own the album with the Silver Machine medley but had no idea it was filmed live - so that's made my day (for all James Last middle of the road cheese, he definitely had moments of genius, the Voodoo Party album is deranged).

Yes, Vi sounds like a decent person; and i noticed that she di do a duet, not with Arthur Mullard, but with Richard Lloyd of the Nightingales. Not heard that as of yet....might find that for my up and coming Nightingales extravaganza. I notice that Lance D'Boyle (RIP) was no spring chicken either, 77 when he died earlier this year.Apparently, as you suggested, in great poverty.I heard he got ripped off for all his cash when his bank cards got nicked?